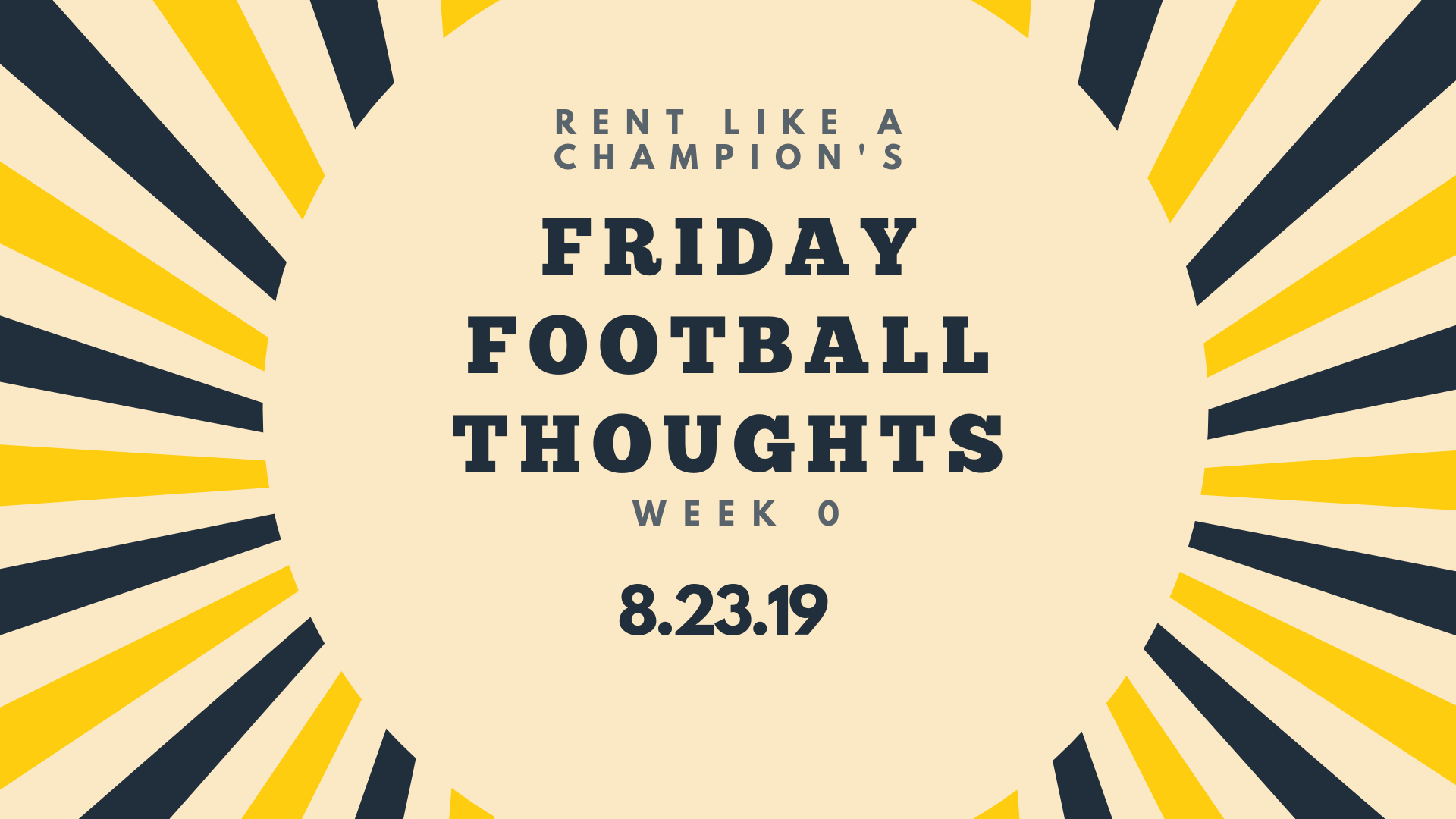 WE DID IT! IT'S FINALLY HERE! The 2019 college football season kicks off THIS WEEKEND with two fantastic games on both coasts of the country. And while it's only two games... boy oh boy... are they good ones.

So before you gather your group together and park in front of the TV Saturday night to take in our first taste of collegiate action this season, our newest writer, Betsy Goodfriend, breaks down both of these highly-anticipated match-ups.

Take it away, Betsy!

Week 0 has high stakes in the Sunshine State, especially since it’s a week usually reserved for a Hawaii game and maybe a game in Australia, not a high-profile rivalry game in the Lower 48.

The Gators are coming off a 10-3 season in Dan Mullen’s first year at the helm. Mullen’s team averaged 35 points per game on offense, which was a welcome development for Gator fans who had been getting used to winning games with only their dominant defense to rely on.

Speaking of the Gators’ defense, it’s still great. Todd Grantham’s defense forced 26 turnovers last season, and seven starters on that defense will be back in the blue and orange this year.

On the other sideline, Miami is led by first-year head coach Manny Diaz, who used to be Mullen’s defensive coordinator at Mississippi State during two separate stints in 2010 and 2015.

The Hurricanes will be breaking in a new quarterback, redshirt freshman Jarren Williams. Williams was a four-star recruit in high school, and he recently beat out Ohio State transfer Tate Martell for the starting job in Coral Gables.

My two players to watch in this game are Florida quarterback Feleipe Franks and Miami wide receiver Jeff Thomas.

Franks threw for 2,457 yards and 24 touchdowns in 2018, and with another offseason to get comfortable with Dan Mullen’s offense, he should only improve in 2019.

His completion percentage was just 58.4 percent last year, and if he can complete 65-70 percent of his passes in this game, Florida will be able to put together long offensive drives and keep the defense well rested.

Thomas is a speedy wideout who only had 35 receptions last season, but he made them count by averaging 16.1 yards per catch. He left the team before the end of the season with the intent to transfer to his home-state team Illinois, but he decided to return to Miami soon after the season ended.

If Thomas has at least 10 catches in this game, Miami has a great chance to upset the 8th-ranked Gators.

Wouldn’t we all love a summer trip to Hawaii?

Arizona gets to live the dream when it visits Hawaii for its season opener. While the long travel time can wear on players, waking up near the beach surely makes up for it.

Neither quarterback in this matchup is particularly accurate.  Arizona quarterback Khalil Tate completed 56.3 percent of his passes last season, and Hawaii’s Cole McDonald was not much better with 58.9 percent.

McDonald threw for 36 touchdowns and four interceptions in his first season as a starter in 2018. He added four touchdowns on the ground, but rushing wasn’t a big focus of his game.

Defense is also neither team’s strong suit, but both units have improved over the years.

If both teams’ quarterbacks can sling the ball accurately in this game, it’ll be a shootout.

But even still, the defenses may not be able to force enough short drives to keep the ball out of their opponent's possession.

Expect a back-and-forth game that will ride on which defense can force two or three three-and-outs.

Football is Kicking Off... But There's Still Time!

Football may be kicking off this weekend, but we're still got plenty of homes available in town for the college football season! Click below right now to get on your way to game day this year, and stay closer to the action with Rent Like A Champion...

Which Clemson game should you go to? Let's break it down...
Week 0 Recap: Three Things from College Football's Opening Weekend