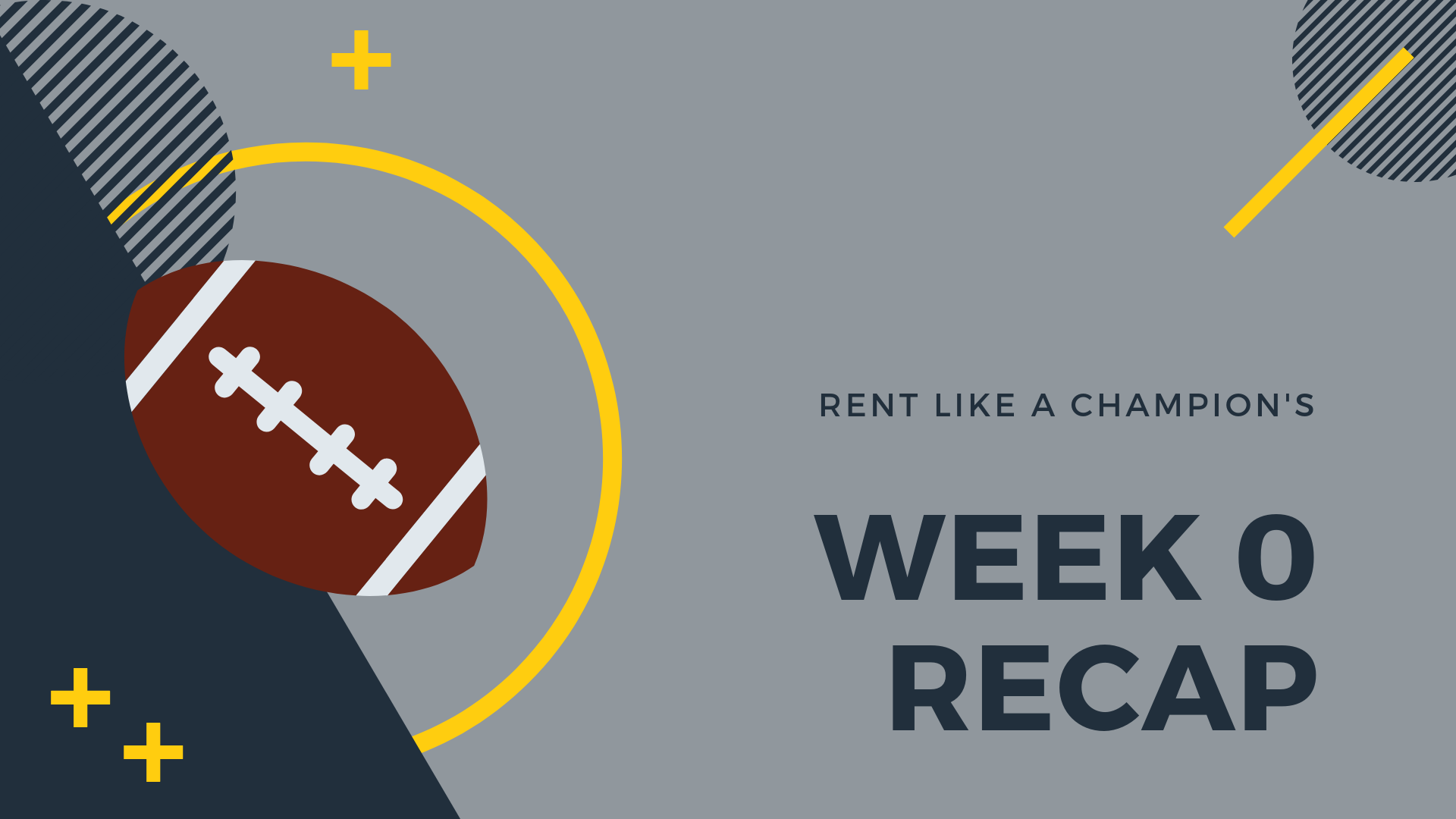 WE'RE BACK! Oh, how good it feels - college football just finished its first weekend, and we are officially off and running on the 2019 season.

Look, were the games this weekend necessarily... er... aesthetically pleasing? No. BUT, it did give us a few keys things to look out for as the rest of the schedule kicks off this upcoming weekend.

Here are my three takeaways from the Week 0 action...

Miami vs. Florida was an ugly game - but one that will nonetheless already have bowl implications

The Sporting News put it best:

Florida found a way to end the game with a higher score than Miami. We don't say "win the game" because honestly, it appeared neither team really wanted to win.

That, truly, is the best way you can describe a game with five combined turnovers (including four from the team that would eventually come out on top), and 225 total penalty yards between the two squads. In short: neither team looked sharp.

Florida QB Feleipe Franks had 254 yards and two touchdowns (along with one on the ground) to finish with a 151.6 passer rating... but he also threw two interceptions in the 4th quarter and accounted for three total turnovers. The Gators' secondary, so heralded coming into the season, succumbed to numerous bonehead mistakes - including an inexcusable pass interference that allowed Miami to convert a 4th and 34.

Meanwhile, however, Miami's offensive line allowed 10 sacks, and the 'Canes simply made too many mistakes of their own down the stretch - unable to prevent Florida from coming away with the victory.

It was the kind of performance you might expect from a Miami team playing a week earlier than usual with a brand new head coach, but not what you'd expect from a veteran Florida team with SEC Championship and College Football Playoff ambitions.

And while it's early in the season and both teams will no doubt improve as the weeks go on, this will have implications when bowl season comes around. Miami should pick up some big wins in the ACC throughout the year - and the higher they climb, the more impressive Florida's win will look to the selection committee when it comes time to place the Gators in postseason play. And while the Hurricanes' momentum for 2019 hit a hiccup on Saturday, should Florida have the kind of season in the SEC many expect them to, not only will it dull the sting of this loss, but it could also allow Miami to buoy a climb of their own, a la Notre Dame and Georgia in 2017.

So no, it wasn't pretty to look at, but my guess is this isn't the last we'll be talking about this Floridian showdown in 2019...

All three of the following things are true:

Much was made this offseason - both by me and by the national press writ large - about how the Pac-12 is lacking a true national contender to get the conference back into the College Football Playoff, where it hasn't been since Washington's Peach Bowl appearance in 2016-2017.

Also, though, no one really had high hopes that Arizona - who fell to Hawaii this weekend 45-38 - would be that team. Sporting News picked them to finish just above Colorado for second-to-last in the Pac-12 South, and while the excitement surrounding a healthy Khalil Tate was undeniable in year 2 under Kevin Sumlin... it's not as if their ceiling was anywhere near Oregon's or Washington's.

But also... taking a loss to a Hawaii team that enters this year projected to land 94th in the S&P+ is... not a good look for the conference to kick off the year.

The good news? They'll be able to rebound pretty quickly with this weekend's upcoming slate, as Oregon takes on Auburn in one of Saturday's biggest match-ups. Plus, games like Stanford vs. Northwestern and UCLA vs. Cincinnati, though lower profile, give the Pac-12 a chance to find their footing in the non-conference - all of which will matter come bowl time.

Love it or hate it, Week 0 appears here to stay

Let's end where we began: neither of these games were pleasant to look at - that seems to be the prevailing take coming out of college football's pseudo-opening weekend.

But despite all of the hand-wringing, ESPN pulled in some absolutely stellar numbers with a 4.1 overnight rating posted for the Gators vs. 'Canes game - the highest rating the network has had for a college football since 2016, per Saturday Down South.

So despite it's slightly sloppy appearance this year, I expect in the future we'll have even bigger names kicking the college football season off in Week 0.

College football may have just kicked off, but you still have time to book a trip this season!

We've got more than 4,000 weekend homes still available for college football season in more than 40 cities nationwide! Click below to begin looking through homes close to where your favorite team will be this year, and get your group in the game this season...