Which Clemson game should you go to? Let's break it down... 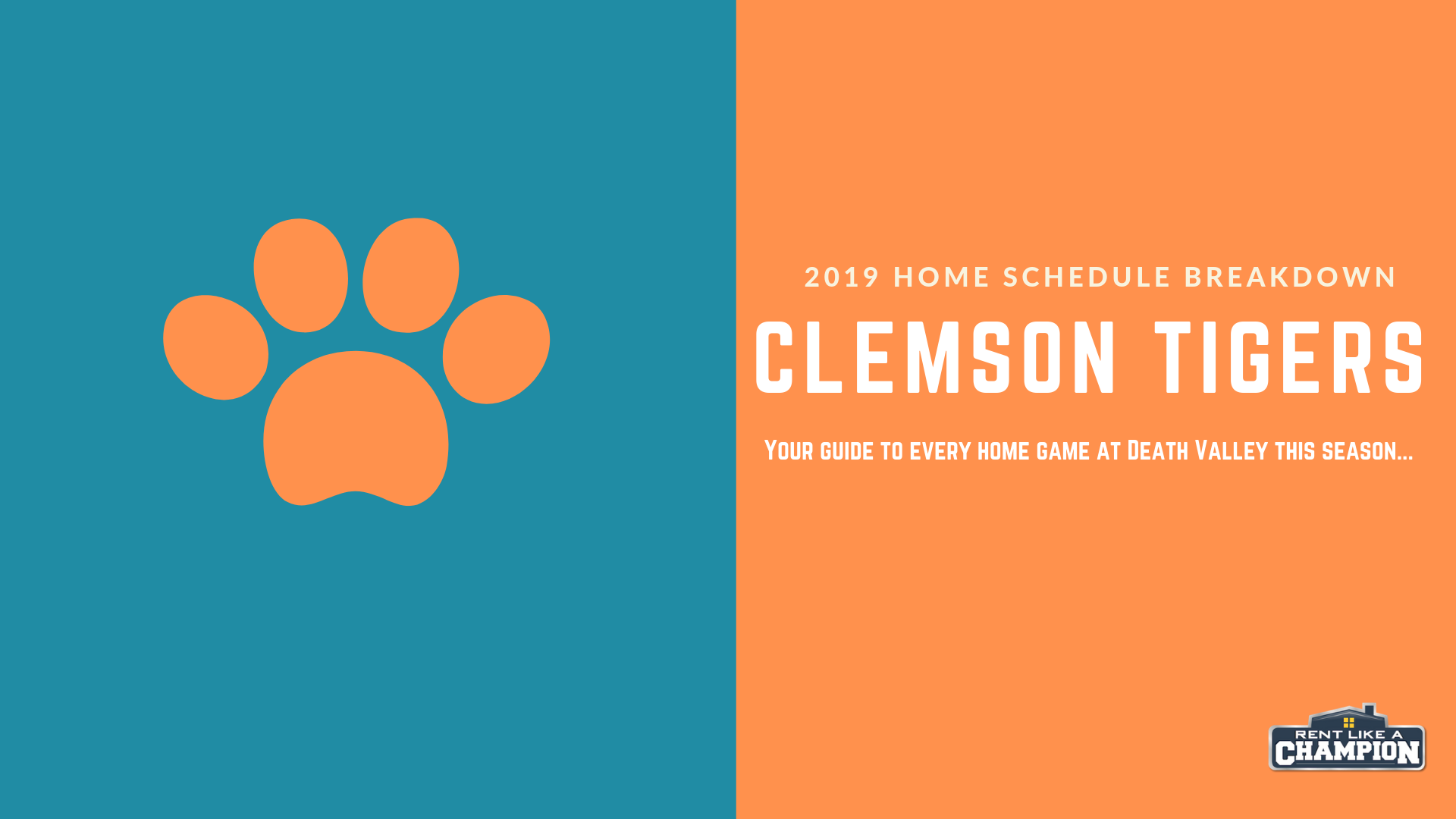 Fresh off of their resounding championship victory in 2018, the Clemson Tigers will return to the gridiron in a few short weeks to mount their campaign to get back to college football's mountaintop and notch back to back national titles.

... and it's no secret, they're a heavy favorite to do just that.

But it's more than Clemson's talent (and believe me, there's plenty of talent) that has the national media so enthralled with the Tigers' title hopes. It's also a schedule that the FPI ranks as just 56th, leaving Clemson with a 49% chance of going undefeated this season.

And just who will be in their way as Clemson attempts to make good on those odds? Well, at Rent Like A Champion, we have more than 100 weekend vacation rentals near Clemson - so you might say we're a little biased about the home games.

So without further ado... here's a breakdown of Clemson's home schedule:

Clemson opens up with a little Thursday night action, as the Tigers take on Georgia Tech - and for the first time since 2008, they'll be facing something other than Paul Johnson's triple-option attack.

So, what can the Tigers expect from first year coach Geoff Collins' squad? Put simply... we just don't know.

Offensively, moving from a triple option to what looks like a pro-style spread attack is such an extreme change it's almost worth tuning in throughout the season just to see how it progresses. It's a long rebuilding process Collins is putting together in Atlanta - one made especially tenuous given the stiff competition in the Coastal Division of the ACC. Plus, opening up against the defending champions and the projected 8th ranked defense in the country won't make it any easier.

So to offset this uncertainty on offense, you can expect Georgia Tech's defense to go for home runs in the hopes of getting some big plays that will even things up. GT's defensive roster won't be brimming with experience, necessarily, but Collins' is a talented defensive mind (his Temple teams landed in the top 50 defensively each of the last two years), and there's enough there to test Clemson's offense early in the season.

Check out all of our available weekend home rentals for Clemson vs. Georgia Tech now!

Following one in-conference tune-up against Georgia Tech, it will be out of the frying pan and into the pressure cooker for the Tigers as they take on inarguably their toughest match-up of the year against Jimbo Fisher's Texas A&M Aggies.

When the Aggies do come to Clemson, they'll be bringing veteran QB Kellen Mond with them - along with the sure handed Quartney Davis in the slot. He'll be joined by Jhamon Ausbon and Kendrick Rogers - who combined for for just north of 700 yards receiving last year. I expect, however, that number will go up with the departure of TE Jace Sternerger and RB Trayveon Williams - the absence of both should put more pressure on Mond and the receiving core.

Still, much of the offensive line returns, as does RB Jashaun Corbin, who will be joined by UCF transfer Cordarrian Richardson from UCF in the backfield - and, when put all together, Texas A&M's offense has as high a ceiling as any in the country.

The defense, on the other hand, feels like it has a bit of work to do - especially through the air.

They will lose much of their stellar defensive line (one that ranked 19th in pass defense last season, according to the S&P+), most notably at defensive end - where both Landis Durham and Kingsley Keke will no longer be roaming. That will no doubt impact their ability to repeat their 22nd ranked adjusted sack rate from a year ago.

Add that to the fact that they'll lose two safeties from a secondary that already found itself in the bottom half of the country - and this could be a game in which Trevor Lawrence absolutely goes off for the Tigers.

Check out all of our available weekend home rentals for Clemson vs. Texas A&M now!

After two weeks of taking on Power 5 competition, Clemson will shift its focus to the C-USA's Charlotte 49ers, who find themselves under first year head coach Will Healy, trying to squeeze some juice out of a program that's struggled to get any momentum going over the past few seasons.

They landed 118th last year in the S&P+, and given the returning talent on the roster it's unlikely they'll rise much higher than that in Healy's first campaign; this rebuild will take some time.

However, the program is also not without its bright spots.

RB Benny LeMay enters his senior year having been one of the most productive backs anywhere in the country. Last year he got 1,243 yards and 11 touchdowns (including five games with 100 yards or more) - and even with having lost several key members of the offensive line he's expected to once again put up big numbers.

On the other side of the ball, the defensive line returns basically everyone that made the 49ers the country's 24th best rush defense - but they'll also return many of the players that gave Charlotte the country's 111th rated pass defense... so, yet again, this could be a big game for Lawrence and the offense.

Check out all of our available weekend home rentals for Clemson vs. Charlotte now!

The Willie Taggart era in Florida State got off to a... well let's call it a rocky start.

What began with optimism around a new era in Tallahassee - one highlighted by a team projected at 19th in the preseason - finished a disastrous 71st, and beget only more questions heading into year 2.

The good news, however, is that the talent is there.

QBs James Blackman, Wisconsin transfer Alex Hornibrook, and Louisville transfer Jordan Travis will all vie for the starting spot come the team's opener against Boise State, and whoever gets the call under center will have a great deal of talent to work with in the passing game; three of the Seminoles' top four receiving are back in Tamorrion Terry, DJ Matthews, and Keith Gavin.

Meanwhile, RB Cam Akers will enter his junior year poised to take another step forward in the backfield... but we can't go too deep into the FSU rushing attack without talking about the offensive line, which was bad in 2018. Very, very very bad. I'm talking dead last in adjusted line yards per carry bad.

And the good news continues on the defensive side of the ball, where the 'Noles will be led by nose guard Marvin Wilson and three senior linebackers in Dontavious Jackson, Adonis Thomas, and Emmett Rice. Plus, with a secondary that returns basically everyone coming off of a solid 44th ranked pass defense in 2019, this could be a sneakily good test for the Tigers come October...

Check out all of our available weekend home rentals for Clemson vs. Florida State now!

From the outside looking in, Boston College always feels like a program on the brink of breaking through and really becoming a top-flight program during the relative downturn in the ACC recently.

They've been remarkably consistent - getting to the seven win mark in six of their previous seven seasons - but last year's 7-2 start felt like the start of something more. But with their 7-5 finish, they will once again look at 2019 as potentially the "next step" for this Eagles program.

If this is going to be the year, it will need to begin with their offensive efficiency - which landed 110th in 2018 despite a fair bit of talent throughout the skill positions. AJ Dillon notched 1,108 yards and 10 touchdowns a year ago but finished with a success rate of just 38.8%.

The Eagles were 27th in marginal explosiveness (11th in the passing game), but it wasn't enough to improve their paltry 5.42 yards per play (93rd nationally). Yikes.

Making matters worse for the Eagles in this particular match-up against Clemson is that they'll lose four of their five top DBs from a year ago, leaving enough inexperience in the secondary for Lawrence to pick apart all day (are you sensing a pattern with all of the teams Trevor Lawrence has a chance to dominate?).

Check out all of our available weekend home rentals for Clemson vs. Boston College now!

On paper, a November game against the FCS Wofford Terriers appears to be a no-contest, and it will almost certainly be a cake-walk for the #1 team in the country. But the Terriers are far from a pushover, and make no mistake: they'll come ready to play.

The FCS' 8th ranked team and preseason pick to win the Southern Conference will start five experienced offensive lineman and a three-year starter in Joe Newman at QB - leading a triple option attack that will be unlike anything the Tigers face this season.

And on the flip side, their defensive prowess at stopping the run helps them own the clock (3rd in time of possession in the FCS last season, per HERO Sports), allowing them to absolutely suffocate opponents over the course of the game.

It's not a game I expect to be very close - precisely because I expect Dabo Swinney and his staff know just how dangerous this FCS powerhouse could be.

Check out all of our available weekend home rentals for Clemson vs. Wofford now!

Rounding out the home schedule will be Wake Forest, who enters this season as perhaps the toughest secondary Clemson will face in the regular season.

No, their rankings won't be jaw-dropping; 61st in pass defense S&P+ and 104th in completion percentage allowed certainly won't seem particularly devastating on paper. However, that was more due to a pass rush that simply couldn't get any pressure on the QB whatsoever (85th in sack rate).

The secondary did its job - particularly cornerbacks Essang Bassey and Amari Henderson, who combined for 25 passes broken up on the year. They'll both be back in 2019, and if the line can bring some semblance of pressure up front, then this could sneakily become a tough game for Lawrence at home in Death Valley.

Offensively, they're an incredibly stable bunch behind the combined QB efforts of Sam Hartman and Jamie Newman. Newman largely took over after Hartman broke his leg late in the season, and with Hartman back, there appears to be a bit of a QB battle brewing for Wake Forest heading into the fall.

Whoever wins the job will have to contend with the loss of star receiver Greg Dortsch - but will have the benefit of returning basically everyone else, including five of their top seven receiving options, along with RB Cade Carney and a combined 81 starts along the line.

Look out, this one could be a bit of a trap game late in the season...

Check out all of our available weekend home rentals for Clemson vs. Wake Forest now!

Ready to pick your game and get on your way? We have more than 100 weekend rentals available in Clemson this season for Tigers football - find your perfect game day getaway now!