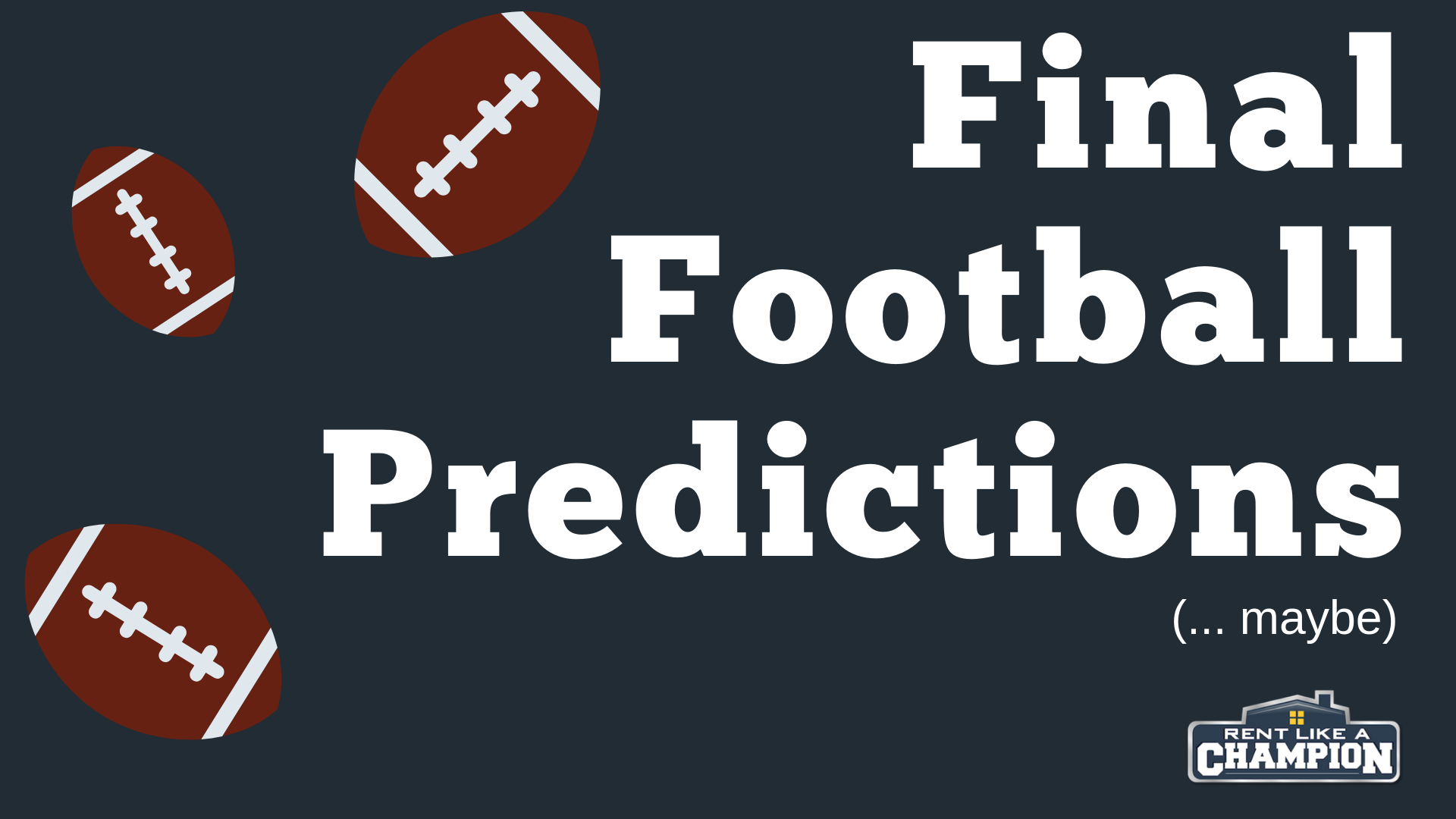 Well, we’ve almost made it - this is our last weekend without college football, folks.  And given that next week we’ll be kicking things off with a preview of two absolutely excellent “Week 0” games, I figured today could be my chance to jump in with a few last minute predictions…

Most Shocking Upset Pick I’m Probably Wrong About: Houston over Oklahoma in Week 1

Let’s get this out of the way first: this is an absurd thing to predict. I know it. You know it. We all know it.

Yes, Oklahoma retools this season by adding former Alabama QB Jalen Hurts in lieu of now-departed Heisman winner Kyler Murray. And yes, a cursory look over the prognosticators reveals that basically everyone and their mother is picking Oklahoma to once again have a top 3 offense nationally.

But looking at the numbers… I don’t know… there are some questions that make this Week 1 match-up incredibly compelling.

For example, consider that Oklahoma, though a proven system under Lincoln Riley’s staff, returns just 46% of their production from last year - good for just 109th. And consider that their defense, an undeniable hindrance for them the last few years, gets a new defensive coordinator in Alex Grinch this season.

Taken all together, it’s fair to assume that the Sooners won’t quite be in midseason form two weeks from now.

And that’s bad news with the Houston Cougars coming to town.

Houston, one of the nation’s best offenses a year ago, returns a staggering 82% of their offensive production, good for 13th in the country - including breakout QB D’Eriq King, who accounted for over 3,500+ yards of total offense last year to go with a mind-boggling 50 total touchdowns.

They’re an explosive team that can put up points in a hurry, and in a week in which, traditionally, we get a few shocks here and there… this is my pick for a potential upset to keep an eye on.

There are a lot of reasons to choose Trevor Lawrence to hoist the most coveted individual trophy in the sport this season, but for the sake of simplicity - let’s just go through the numbers.

During his freshman season, Lawrence…

He’ll be returning his top receivers, his starting running back, and three All-ACC offensive linemen this season.

AND, it must be noted, Lawrence will be helped by a lighter schedule when it comes to secondaries he’ll be facing. The highest rated pass defense they’ll take on this season will be South Carolina’s - who landed 34th in pass defense S&P+ last season, but who also lose their top safety and CB heading into this season.

All this put together, and Clemson’s sophomore is primed for the kind of year we’ll be talking about for quite some time.

Looking over this field, Clemson and Alabama are the safe bets - both have talent, both have likely Heisman finalists, if not winners (Lawrence for Clemson, and Tua Tagovailoa for Alabama), and both have the experience to get back to college football’s promised land.

So, what of Michigan and Texas?

For Michigan, they’ll return star QB (and another potential Heisman candidate) Shea Patterson, now in his second year under Jim Harbaugh at Michigan, as well as a slew of returning skill positions on offense, as well as four All-B1G offensive linemen. They lose a bit defensively, but coordinator Don Brown always has plenty of tricks up his sleeve to make it work - they’ll be fine.

But unlike last year, two of Michigan’s losses last year - Notre Dame and Ohio State - will return home this season. These two games, plus their games against Penn State and Wisconsin on the road, represent the four toughest games on their schedule.
But they are also the favorite in all but one of these games (Wisconsin). Even if they drop one (which I’m guessing they do), they could still land in the B1G Championship... and, with a victory, a potential playoff bid.

My guess is that Georgia drops two games on their darn-near impossible slate of games this season, and that makes way for the B1G champion - the committee won’t leave them out again this year.

And Florida? Well, it’s going to be hard to put together a list with Michigan on it without including the team that took them to the cleaners last year in the Peach Bowl, but you’ll also be hard pressed to find a better roster anywhere in the country this fall - and that’s including Tuscaloosa and Clemson.

Now-veteran QB Feleipe Franks appears ready to join the upper echelons of college football QBs, and the second year under Dan Mullen in Gainesville has yielded a deeproster that ranks 5th in returning production in 2019.

They also have a schedule that gives them the opportunity to turn heads at multiple points throughout the year - be it week 0 against Miami (more on that next week), in their road match-up against LSU, their yearly rivalry with Georgia, and - should the stars align - in the SEC Championship game.

It’s the kind of year where anything can happen, but all things considered… these are picks…

… IS IT TIME FOR KICKOFF YET?

Still thinking about a last minute trip to town for the upcoming season? We still have plenty of home rentals available for college football game day, so get on your way now!

Please note: an earlier version of this blog stated that this would be Dan Mullen's third year as the Florida head coach. It is his second year - this has since been corrected.
Our Best-Reviewed South Bend Weekend Rentals - Available This Season!
Which Clemson game should you go to? Let's break it down...