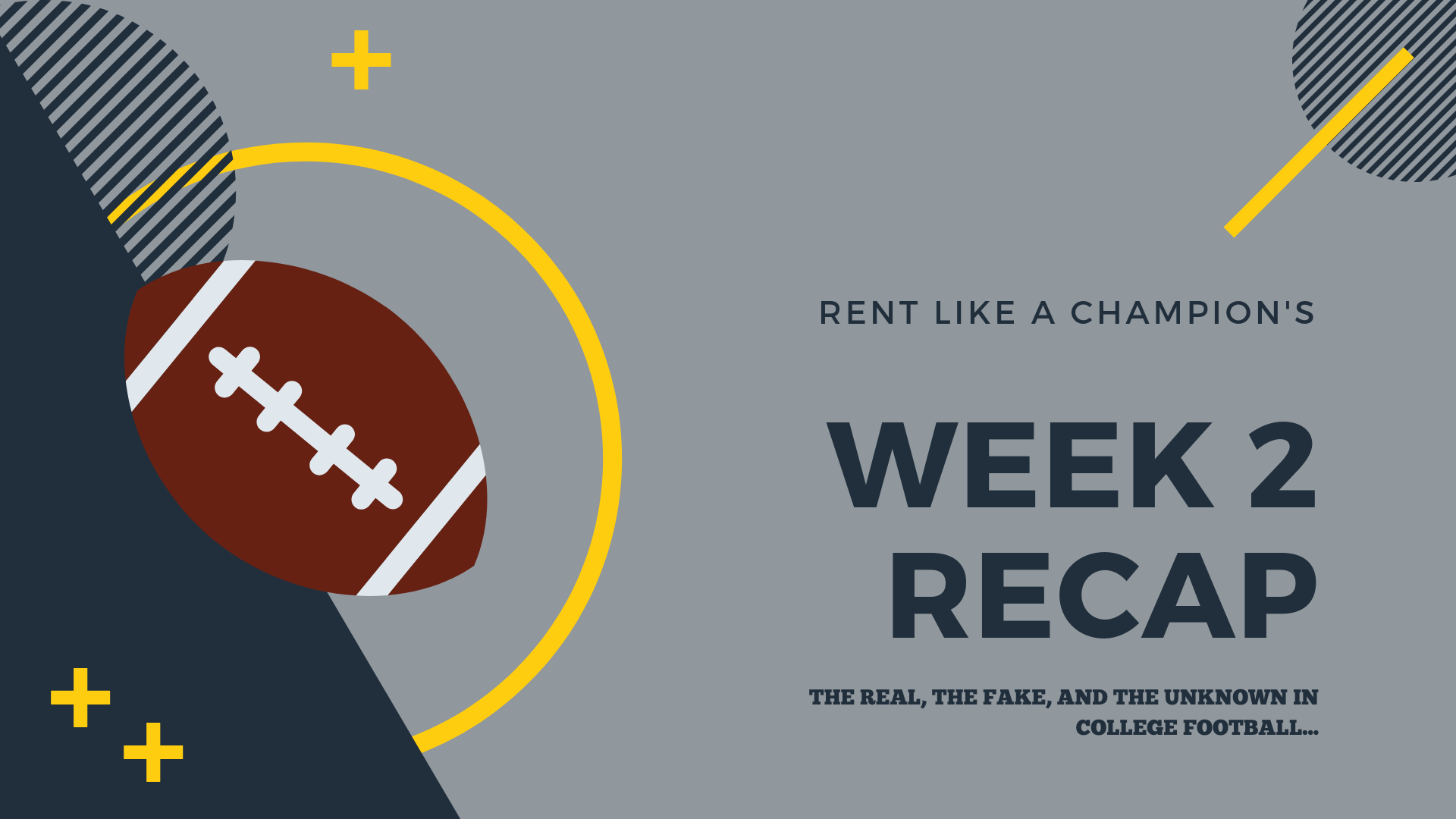 It doesn’t take long for narratives to form in college football. Conference play hasn’t even started yet, and there are already plenty of contenders, pretenders, and storylines that are capturing fans’ attention across the country.

Not that we’re above any of that noise (take a look at last week’s Friday Football Thoughts title for proof) - but after only two weeks… it’s worth exploring which of these storylines are real, which are fake, and which need more time for further investigation…

Let’s take a look at a few such case:

Clemson will go to the College Football Playoff: FACT

Last week, I said that this past Saturday’s match-up with Texas A&M would be Clemson’s toughest challenge of the season - a match-up so important, that winning it would secure their spot in the College Football Playoff.

With their 24-10 win over the Aggies (in a game that didn’t even feel that close), Clemson sent a message to the rest of the country that despite their relatively easy schedule, despite their comparatively weak conference, and despite plenty of detractors who predicted a dogfight with A&M… they will be dancing come January.

QB Trevor Lawrence had an even sharper game than the Tigers’ opening weekend match-up with Georgia Tech. He threw for an efficient 268 yards and a touchdown on 24-35 completions, while adding one more TD on the ground to cap off a 9-play, 89 yard touchdown drive near the end of the first half.

Their defense, too, looked downright stifling, and held Kellen Mond (who talked plenty of trash heading into this game) to just a 57% completion rate to go along with two turnovers on the day. His only touchdown would come in the fourth quarter, when the game was long out of reach.

They out-gained the Aggies by 100 yards on the day, and led 24-3 heading into a garbage time 4th quarter. Clemson did all of this, mind you, this against a team that took them the distance in a 28-26 thriller just a year prior, and even just two weeks in, the message is clear: the Tigers aren’t just back - they might be even better.

Ohio State is a lock to win the B1G: FICTION

Ohio State has looked great - there’s no doubting that. And I’m not going to sit here, pretending that they shouldn’t be considered the (heavy) favorite heading into conference play.

But a lock? Hmmm…

This theory goes hand in hand, of course, with three names: Wisconsin, Penn State, and Michigan - all of whom could have reasonably been selected as potential conference champions heading into this year. We’ll get to the Badgers in a moment - because they’re my most intriguing team right now - but we also have to note that you can’t count out the Nittany Lions or the Wolverines quite yet.

Granted, neither team has looked particularly overwhelming through two games - but they’ve both shown sparks. Penn State exploded for a 28 point third quarter behind rapidly improving sophomore QB Sean Clifford, and even in their near loss to Army this weekend (an Army team coming in with a 10-game winning streak dating back to last year), Michigan’s always-staunch defense held the Black Knights’ pesky triple option to its lowest per-carry rate since 2015. Given a bit more time, these are talented rosters with all the potential to vastly improve as the year wears on.

But it is Wisconsin who has my attention as a team to derail the Buckeyes’ title run.

Against two FBS opponents (USF and Central Michigan), the Badgers have won by a combined 100 points - and if that weren’t enough, their defense hasn’t even allowed a point yet.

Things are about to heat up, of course - Wisconsin and Michigan will meet on September 21 for what could end up being the Game of the Week, and that will give us some immediate indications as to just where these teams will fall into the pecking order. And Ohio State, themselves, will next travel to Bloomington to take on an Indiana team that’s given them plenty of trouble in the past.

Point being - Ohio State may have sent a few messages to kick off the season, but they’re a long way off from sewing things up.

LSU is the second best team in the SEC: FACT

I really went back and forth on this - but coming off their huge road win in Austin this weekend, I think I’ve got to put the Tigers from Baton Rouge squarely behind Alabama as the second best team in the SEC.

Yes, the SEC is chock-full of spectacular talent and yes I know that Auburn is coming off a massive win over an arguably better opponent in Oregon and yes okay both Georgia and Florida are still looming in the SEC East.

But to walk into Darrell K Royal Memorial Stadium, against a piping hot Texas team led by one of the country’s best QBs and dominate the way they did down the stretch? There’s simply no win that has meant more to a team up until this point - and no game that has turned quite so many heads, either.

And while it feels borderline sacrilegious to say this about an LSU team: it hasn’t been their defense that’s impressed us most, it’s a high flying spread offense behind QB Joe Burrow. Their defense, mind you, (which ranked 1st in the defensive S&P+ rankings heading into the season) has looked solid thus far and was absolutely fantastic down the stretch against the Longhorns on Saturday - but Burrow and the offense currently rank 2nd in offensive efficiency, hung 573 yards on a fantastic Texas defense Saturday night - the highest number by an LSU offense since November 2017.

Meanwhile, every other SEC team besides Alabama feels like they have a “but” attached to their first two weeks; Florida has promise but looked sloppy in week 1, Georgia has looked as-advertised but haven’t played anyone yet, and Auburn may have beaten Oregon but they still stalled at times against Tulane, and freshman QB Bo Nix has more to prove as the year goes on.

LSU’s hype is real, and right now if you’re putting anyone besides the Tide above them… you’re gonna have to make a heck of a case.

It’s hard to overstate just how good Jalen Hurts’ first two weeks of 2019 have been:

All of this, combined with Oklahoma’s dominant performances through two games, has led many to pin Hurts as the natural Heisman frontrunner through two games. After all, most dominant player on the nation’s best offense playing for a top five team? It makes all the sense in the world - just ask Kyler Murray.

But while Hurts’ will, in all likelihood, get a ticket to New York as a finalist by year’s end - I’m not quite ready to crown him the frontrunner just yet.

For one, the two teams against whom he’s racked up these points have been a Houston team that - despite my optimism about their upset chances - came into this year projected at 118th defensively, along with FCS South Dakota. Now, naturally, over 800 yards of total offense speaks for itself - no matter who you’re playing. But LSU’s Burrow has passed for nearly 800 yards by himself already, including in his aforementioned performance against the 9th ranked Longhorns on national TV, while Lawrence was likewise dominant against A&M.

Add in Ohio State’s Justin Fields, Wisconsin’s Jordan Taylor, and Hurts’ old running mate Tua Tagovailoa (who very casually has amassed a 200+ passer rating of his own), and as good as Hurts start to the season has been - I just need to see more against better competition before I put him at the top of my power rankings.

Did I miss anything? Drop me a line!

What college football takes are you burning on through two games? Send an email to hank@rentlikeachampion.com and let me know your thoughts!

Rent Like A Champion still has thousands of available weekend home rentals for college football’s biggest match-ups this season! Click below to search our entire inventory of homes close to your next destination, and find your group the perfect game day getaway...

Just One Quarter Away: How Penn State Overcame a Slow Start to Rock Buffalo
Penn State vs. Pittsburgh: Preview, keys to the game, and predictions 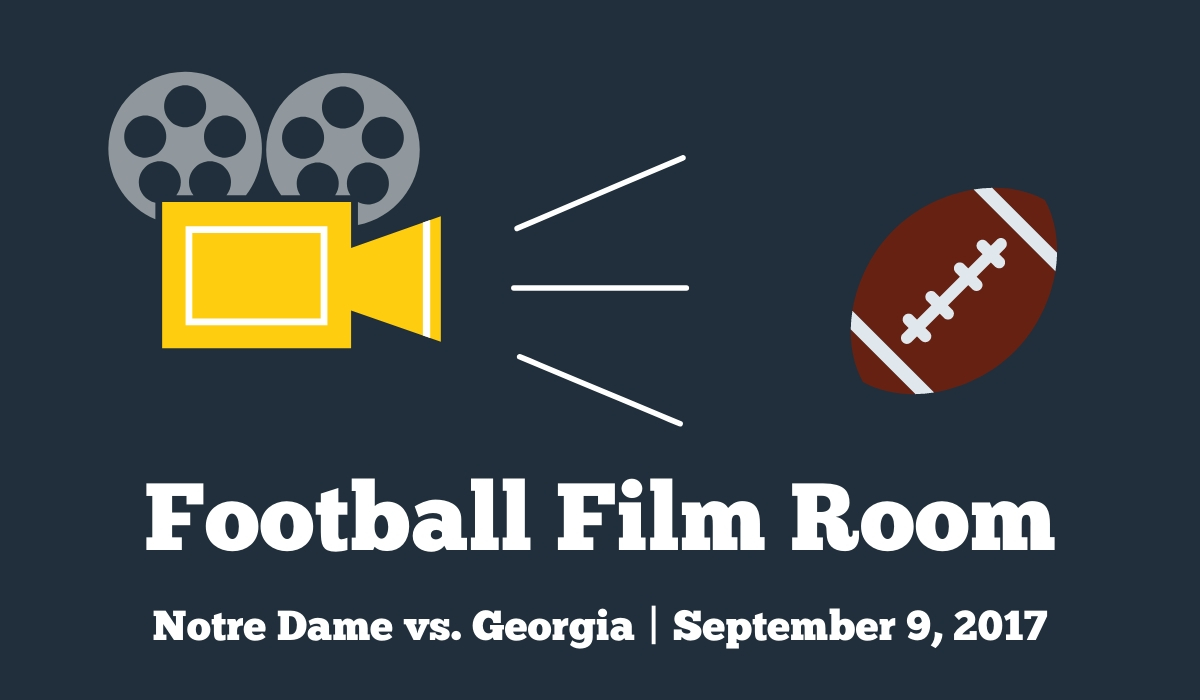 How COVID-19 is affecting the sports world: List of cancellations and postponements