Friday Football Thoughts: Week 2 is "Put Up or Shut Up" Time 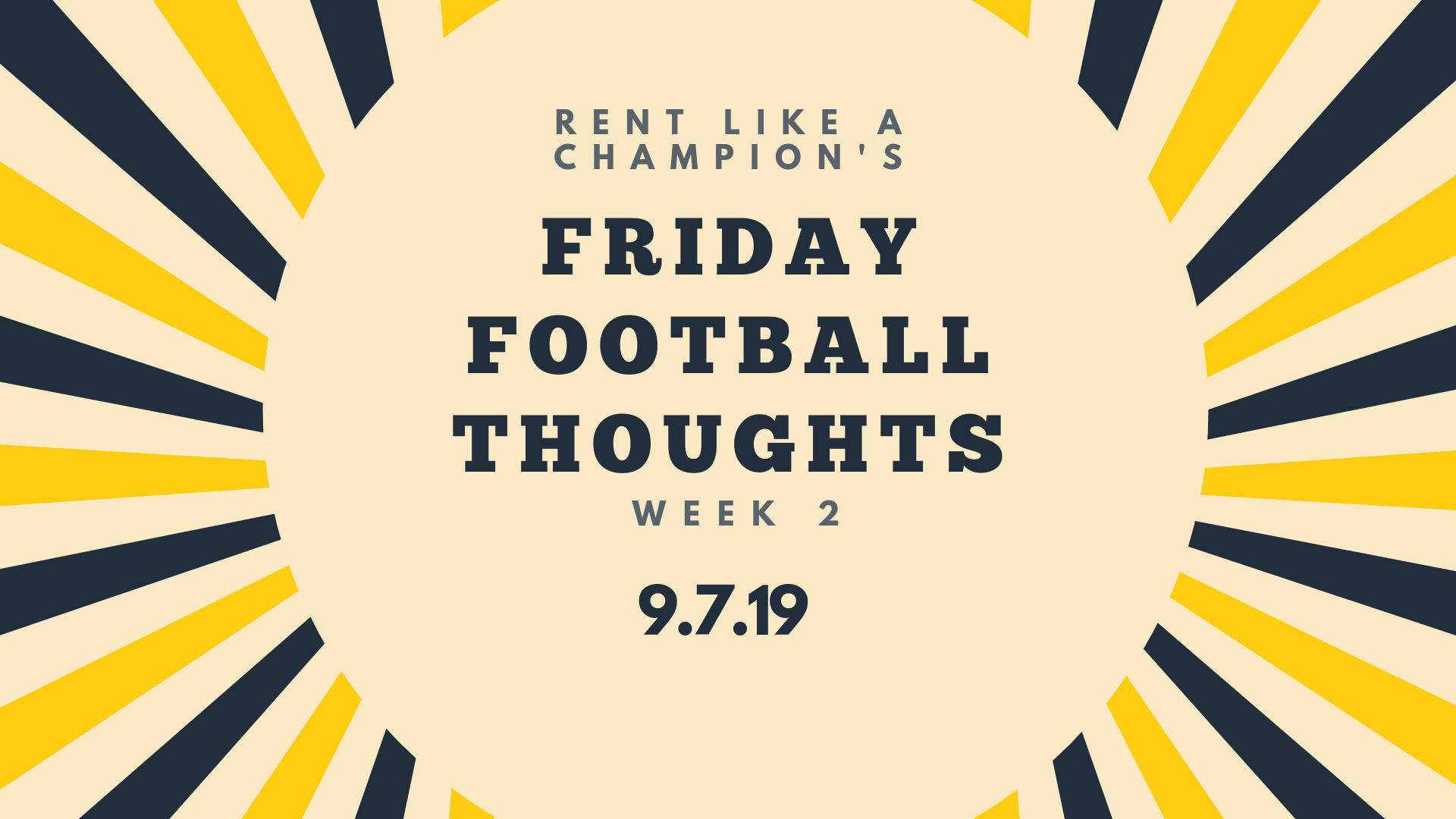 Week 1 had a little bit of everything: drama, comebacks, breakthrough stars… and plenty of statements made. But week 2 will take the action up a notch - because while there’s lots of talk during the offseason (and even more after big wins a week ago), Saturday’s match-ups will test that talk, and ask many self-proclaimed contenders to put their money where their mouth is.

Here’s what we’re looking forward to most…

The Game Everyone Is Talking About:
#6 LSU at #9 Texas

In one of the most anticipated non-conference games of the year, LSU visits Texas on Saturday night.

Texas quarterback Sam Ehlinger leads the Longhorns. Ehlinger is the perfect Texas quarterback; he grew up in Austin dreaming of one day bringing his Longhorns back to the glory he saw as a kid, and he’s well on his way to doing just that.

He threw for 3,292 yards with a 5:1 touchdown to interception ratio. As a true dual-threat quarterback, he ran for 482 yards and 16 touchdowns, too.

On the other sideline is former Ohio State quarterback Joe Burrow. As perfect as Ehlinger is for Texas, Burrow did not start out as LSU’s ideal quarterback. He sat on the bench for three years at Ohio State, and LSU fans didn’t know what to make of him when he first donned purple and gold.

But, Burrow has been solid since he joined the Tigers. He threw foe 2,894 yards and 16 touchdowns in 2018, and kept LSU in games by not making many mistakes.

Both schools are coming off of dominant wins in Week 1. Texas defeated Louisiana Tech 45-14, and LSU beat Georgia Southern 55-3.

The winner of this game will be the team that has a few trick plays up its sleeve to catch defenses off guard or executes fake punts or field goals. Both of these teams are extremely well-disciplined, so whoever can create explosive plays will fare well in this game.

Game That Sneakily Has the Biggest Title Implications:
#1 Clemson vs. #12 Texas A&M

Much has been made of Clemson’s schedule. The defending national champions rank just 56th in strength of schedule this season - giving them a 49% chance of going undefeated… and, frankly, looking at their conference schedule, I’m shocked it isn’t higher than that.

Which is what makes this match-up with Texas A&M so intriguing. It’s the only game in which the Tigers will face a top-15 team according to the preseason S&P+ poll, and one of two games in which they have less than an 80% win probability (the other is their road game against South Carolina at the end of the year).

Texas A&M QB Kellen Mond will be the player to watch. He stated pretty clearly at SEC Media Days that he believes he’s the best quarterback in the country right now - and lest we forget that last year he absolutely waxed Clemson’s secondary for 60 minutes - going 23 for 40 with 430 yards, 3 TDs, and no INTs… leaving him with his highest QB rating of the season.

Of course, things were a little different back then for Clemson - Trevor Lawrence was still splitting time with Kelly Bryant, the Tigers had to contend with both Mond and Aggies star RB Trayveon Williams (who you can now catch playing on Sundays), and, most critically, Texas A&M had the home field advantage.

But put simply: it’s the toughest test the Tigers will get prior to the Palmetto Bowl. Win it, and Clemson’s road back to the playoff is basically pre-paved for them - even with a loss to the Gamecocks at the end of the year, a victory in the ACC Championship game should more than punch their ticket.

Lose, however, and the Aggies immediately thrust themselves in the title picture… and every game - including that critical trip to Columbia at the end of the year - becomes must win for the Tigers.

The Game No One Is Talking About (But They Should):
#23 Stanford at USC

This week’s “Pac-12 After Dark” game is an intriguing matchup between the Cardinal and the Trojans. Both are likely to have new starting quarterbacks this week with USC’s JT Daniels out for the year with a torn ACL and meniscus and Stanford’s KJ Costello questionable to play after suffering a head injury last week.

If Costello is indeed out for Saturday night’s game, redshirt sophomore Davis Mills will start for Stanford. On the other sideline, freshman Kedon Slovis will take the reins for the Trojans.

So we have two young quarterbacks making their first career starts for storied programs on national television while the East Coast struggles to stay awake.

Yeah, that’s the exact formula for an exciting Pac-12 game.

USC’s running back duo of Stephen Carr and Vavae Malepeai had 245 yards from scrimmage. Slovis will lean heavily on Carr in the pass game, while Malepeai will take the bulk of the carries.

Stanford held Northwestern to just 93 yards on the ground, with just a 2.8 yards per carry average.

USC’s defense gave up 206 rushing yards to Fresno State last week, so the front seven will need to stop the run better against Stanford. The Cardinal only rushed for 132 yards last week, led by running back Cameron Scarlett’s 97 rush yards.

The Trojans committed four turnovers against Fresno State and will need to clean up their ball- handling and decision-making against the Cardinal. Expect this game to be sloppy, high-scoring, and close until the end.

Welcome to Pac-12 After Dark.

Looking to get YOUR team in the game this season?

We've still got plenty of weekend home rentals available for game days across the country! Click below to search from over 4,000 homes nationwide, and get your group closer to the action this season...

Week 1 Recap: College football officially kicks off... and boy oh boy was it something
Penn State vs. Buffalo: Previews, keys to the game, and predictions