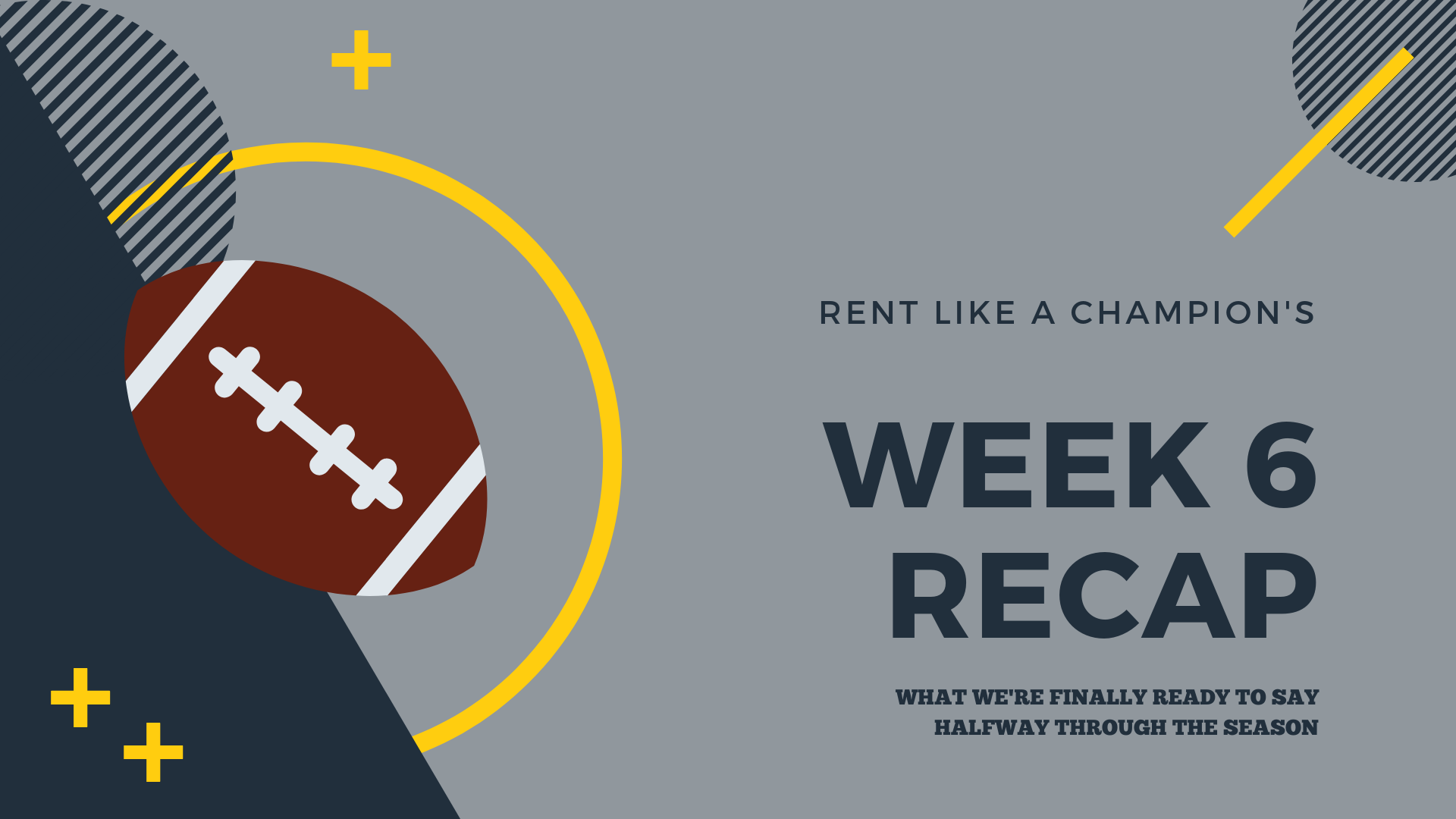 Well, college football’s regular season is nearly at its halfway point… and yet, somehow, it feels like everything is just starting to begin.

The teams that sat at the top of the country still remain there, Heisman candidates that emerged are still in the mix - and the field still feels wide open to all those who began the season with the hopes of being one of the four teams selected for the playoff (except UCF).

But while the national landscape has been left largely unchanged, that doesn’t mean there aren’t some big things I’m ready to claim as we near the midpoint of the seasons.

Here, dear readers, is what I know right now…

Two weeks ago I said that Ohio State should be a team you’re talking about when it comes to the College Football Playoff. And now, two weeks later, I’m here to tell you that they are so much more than that.

We entered this season asking whether any team in the country could compete with Alabama and Clemson this season - and at the midway point, it’s just as important (if not more important) to ask whether either of those powerhouses have the horses to compete with the Buckeyes, who appear to be on a warpath this season. At 6-0, they’re just .1 statistical points behind Alabama in the SP+ (and nearly four points clear of Oklahoma, who is 3rd in the SP+ rankings), but they’re arguably the most balanced team according to that metric, landing 5th and 3rd in offensive and defensive SP+, respectively.

And when you look at their roster, it’s even harder to find a weakness. RB JK Dobbins has already nearly reached 1,000 yards rushing on the year (3rd in yards per game), while Georgia transfer Justin Fields has made the most of his new surroundings. Fields is throwing an absurdly efficient 70% completion rate with 18 touchdowns thrown (4th in the country) to just one interception. This two-headed attack has made it impossible for opposing defenses to hone in on one gameplan; they’ll just beat you any which way.

That’s to say nothing of a defense that’s currently 3rd in yards allowed per game, 1st in tackles for a loss, 1st in sacks, and 5th in interceptions.

The Pac-12 is going to miss the playoff again

On the flip side of the coin, it’s looking like the Pac-12 will once again be missing out on the College Football Playoff.

Both Oregon and Washington, the two primary front-runners coming out of that conference, have been less-than-convincing. With Auburn’s loss to Florida, Oregon’s loss to the Tigers looks even tougher to come back from, and their close wins over Stanford and Cal have only added to the uncertainty. Meanwhile, Washington has already taken two losses, and their best win thus far has come against a middling USC team dealing with a whole lotta chaos.

Utah is still hanging around, and Washington State is still airing it out with the best of them (the Cougars, led by QB Anthony Gordon, are far and away the best passing offense in the country). But Utah took a tough loss to that USC we were just talking about, and for as good as Washington State is offensively, head coach Mike Leach has never been known for his defense; right now they’re even worse than normal at 84th in the defensive SP+.

Pair that with another disappointing year for Chip Kelly at UCLA, and it’s starting to be worth wondering: when will we see this conference return to prominence?

Florida is still in the mix… against all odds

I’ll admit it, when Feleipe Franks went down for the season, I thought my dark horse pick of the Gators landing themselves a spot in the playoff was dead.

But folks, I’ll be darned… them Gators just keep coming.

Behind QB Kyle Trask and an absolutely stellar defense that forced four turnovers and limited Auburn to just 269 total yards on the day (they’re now 5th in defensive SP+), Florida picked up its biggest win of the year - and now, at 6-0, they’re en route for two games that will define their season: a match-up with LSU in Death Valley this weekend, and their rivalry game with Georgia to kickoff November.

They’ll be underdogs in both of those games - but as we’ve seen thus far, you should never underestimate these Gators in 2019.

Jalen Hurts is going to win the Heisman

I’m happy to say I’m no longer on the fence: Jalen Hurts will be your Heisman in 2019.

He’s got the narrative, having left Alabama after losing the starting job to fellow presumptive nominee Tua Tagovailoa for good a season ago and transferring. He’s got the stats - boy does he have the stats - with over 2,000 yards in total offense and 21 touchdowns accounted for already this season.

And he’s got the team to do it with - after all, Oklahoma has laid claim to the last two Heisman trophy winners in this same Lincoln Riley offense. Plus, the Sooners’ remaining schedule will give him plenty of opportunities for unforgettable moments against Texas and the always-electric “Bedlam” game against Oklahoma State at the end of the year.

Speaking of moments… the undefeated Sooners could also be on a collision course to face the Crimson Tide in the College Football Playoff. If you don’t think I’m making popcorn, shutting the doors, and strapping in to watch Hurts try for some legend-status revenge… you’re kidding yourself.

What do you know? Let me know!

What are your thoughts on the college football season so far? Shoot me an email at hank@rentlikeachampion.com to let me know your thoughts.

And, as always, if you’re still planning a trip in 2019 - Rent Like A Champion is the only way to go. Click below to search out weekend home rentals now!

QuikFix helps college students earn, by helping YOU with just about everything
Penn State vs. Iowa: Preview, keys to the game, and predictions