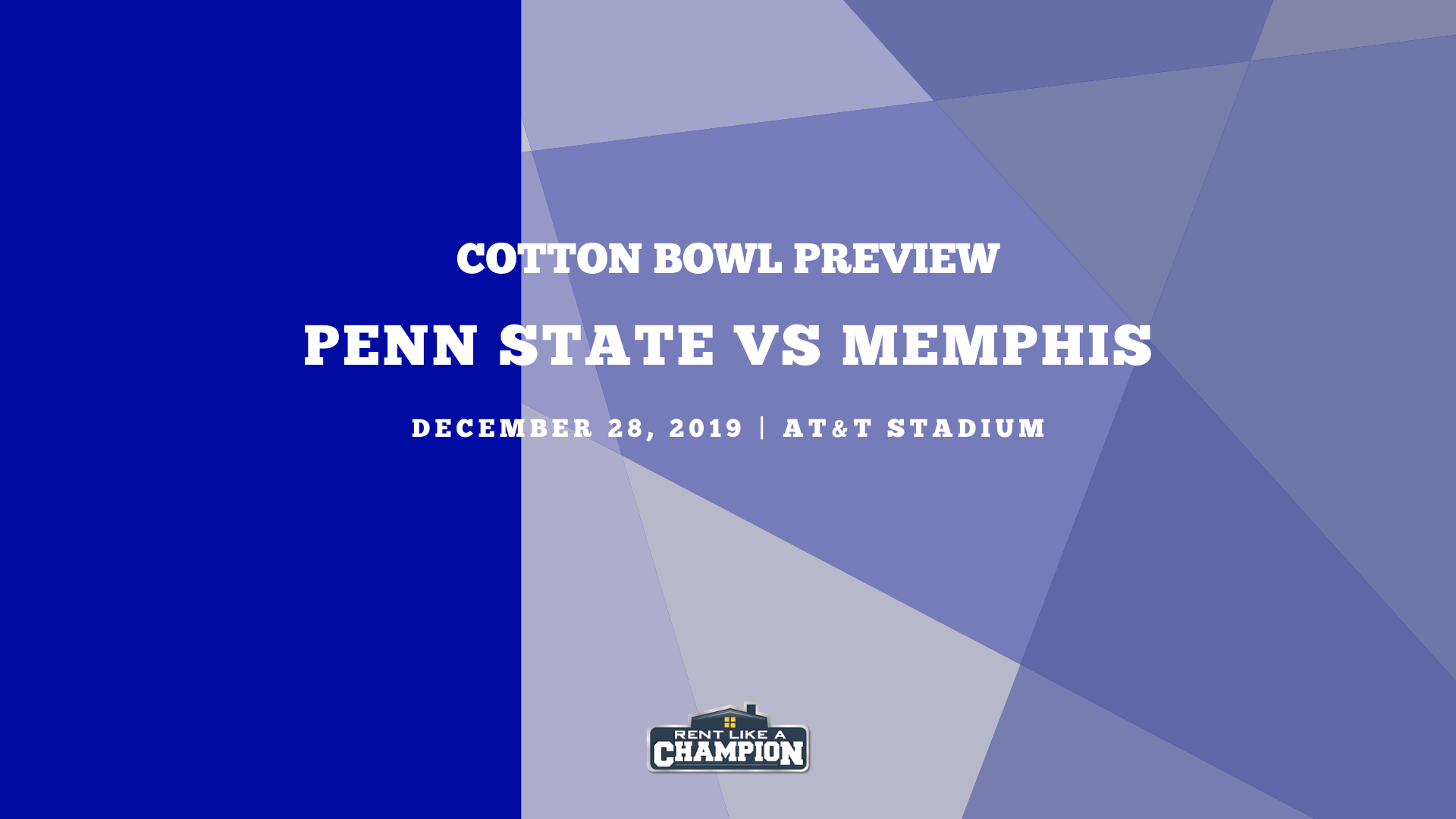 Christmas is over, the New Year is just around the corner… and you know what that means:

It’s time for the big time bowl season to begin.

A lot has changed since the Nittany Lions last took the field: Yetur Gross-Matos announced he’d be declaring for the draft (though he’ll be playing in this last bowl game), coach James Franklin got a new six-year contract extension (no doubt to keep the likes of Florida State at bay), and the Nittany Lions landed the country’s 13th ranked recruiting class on signing day.

And while, at 10-2 - with their only losses coming to Minnesota and Ohio State - it’s fair for Penn State fans to roll their eyes a bit at not being selected for a trip to The Rose Bowl… I can’t lie to you, this year’s Cotton Bowl feels pretty exciting.

So let’s get into it…

ABOUT THE MEMPHIS TIGERS

For the Memphis Tigers, tomorrow will be a mixed bag of emotions.

On the one hand, this is the culmination of a 10 year journey that has seen Memphis rise from a solid, Group of Six program… to what could be a future Big 12 squad with conference expansion seemingly right around the corner. They will be just the sixth Group of Six program to play in a traditional “New Years Six” bowl (lots of “sixes” happening, obviously) - and it’s safe to say that tomorrow represents the biggest game in Memphis Tigers history.

But on the flip side, the man behind the final leg of that journey - Mike Norvell - won’t be on the sidelines for the Tigers, having taken the job in Tallahassee to try to bring the FSU program back to greatness.

That will leave Ryan Silverfield in charge of Memphis tomorrow, and while there’s plenty up in the air for the Tigers at the moment, that doesn’t mean the Nittany Lions should expect anything but their best come kickoff…

Penn State saw some phenomenal offenses in the Big Ten this season - but this Memphis offense is right up there with the best of them.

QB Brady White may not have the acclaim of a Justin Fields or even Tanner Morgan, but this junior has put together one of the country’s best seasons under center - with 3,560 yards passing for 33 touchdowns (to only nine interceptions), for a passer rating of 169.9 on the year.

Even more impressive than White, however, has been the play of this receiving core - which has been phenomenal. More on them in a bit…

And while this passing attack would be enough to scare any defense in the country, RB Kenny Gainwell (what a name) has forced defenses to stay honest with 1,425 yards and 12 touchdowns - despite his offensive line ranking just 100th in line yards per carry. If Penn State’s defensive front can take advantage of this weak o-line, it could keep Gainwell under wraps… but if they let him loose, it could spell trouble.

Overall, this offense ranks 7th in the FEI, 8th in the SP+, and 10th in the country at over 480 yards per game. This Nittany Lions defense will be their biggest test of the year, endstop… but it will be an equally formidable challenge for PSU, as well.

Defensively, it’s tough to know just what to make of the Memphis Tigers.

They’re 50th in yards allowed per game at over 370, made all the more troubling by the fact that their strength of schedule drops their overall defensive ranking down to 75th in the country.

But on the other hand, there are some good indicators: they’re top 20 in both explosive drives allowed (drives in which the opposing offense averages 10+ yards per play), and broken drives (drives in which they allow zero or negative yards). Plus, with 18 total takeaways this season (eight fumbles, 10 interceptions), they land 36th in turnover rate nationally.

Their defensive front has some solid playmakers - most notably Bryce Huff and Joseph Dorceus, who have combined for 29.5 tackles for a loss and 11 sacks on the year. However, they’re also allowing nearly 180 yards on the ground per game and 4.19 yards per carry, good for 79th and 62nd, respectively.

The passing defense, on the hand, really seems to be where their strength lies. They’re led by senior Austin Hall, who has put together a fantastic season in his final year for the Tigers. He’s leading the team in total tackles (69), and passes defended (six), while adding nine tackles for a loss and six sacks on the year. As a whole, Memphis is allowing just over 200 yards per game through the air on 52.9% passing.

Key for the Nittany Lions

Win the battles in the secondary

It’s no secret that the Nittany Lions have struggled in the secondary this season. Minnesota, in particular, used a fantastic core of receivers to pick apart the pass defense en route to the first loss of the year for PSU.

But if Penn State wants to walk away with a Cotton Bowl victory, they can’t let the same thing happen in Arlington… because these Tigers receivers are phenomenal.

Led by Damonte Coxie (68 catches for 1,144 yards and nine touchdowns), this receiving group is incredibly explosive - with five Tigers having recorded at least 20 catches and clocking in at least 15 yards per catch.

Penn State’s pass rush should be able to turn up the clock on White and the passing attack, but the secondary needs to do their job, and can’t lean on their front seven to do the work for them… or else it will be deju vu all over again.

This is going to be a good game, folks.

Memphis will be coming in ready to make a statement behind a fantastic offense, but I don’t think their defense will be able to slow Penn State down. The result? A high-scoring affair in Texas that should have all the drama you’d expect from a big time bowl game.

But there’s one stat we haven’t talked about, yet: 0-3. That’s the Tigers’ bowl record under Mike Norvell.

True, it won’t be Norvell roaming the sidelines tomorrow, but I think the calming presence of James Franklin will be able to keep PSU composed when the game feels like it’s being played at a mile-a-minute; I don’t know if the same can be said for first time head coach Ryan Silverfield.

It’ll be a good one, folks. But I have PSU pulling out the victory. Enjoy the game!

Friday Football Thoughts: Our College Football Playoff Preview is here!
New Years Thoughts on the first round of CFP games