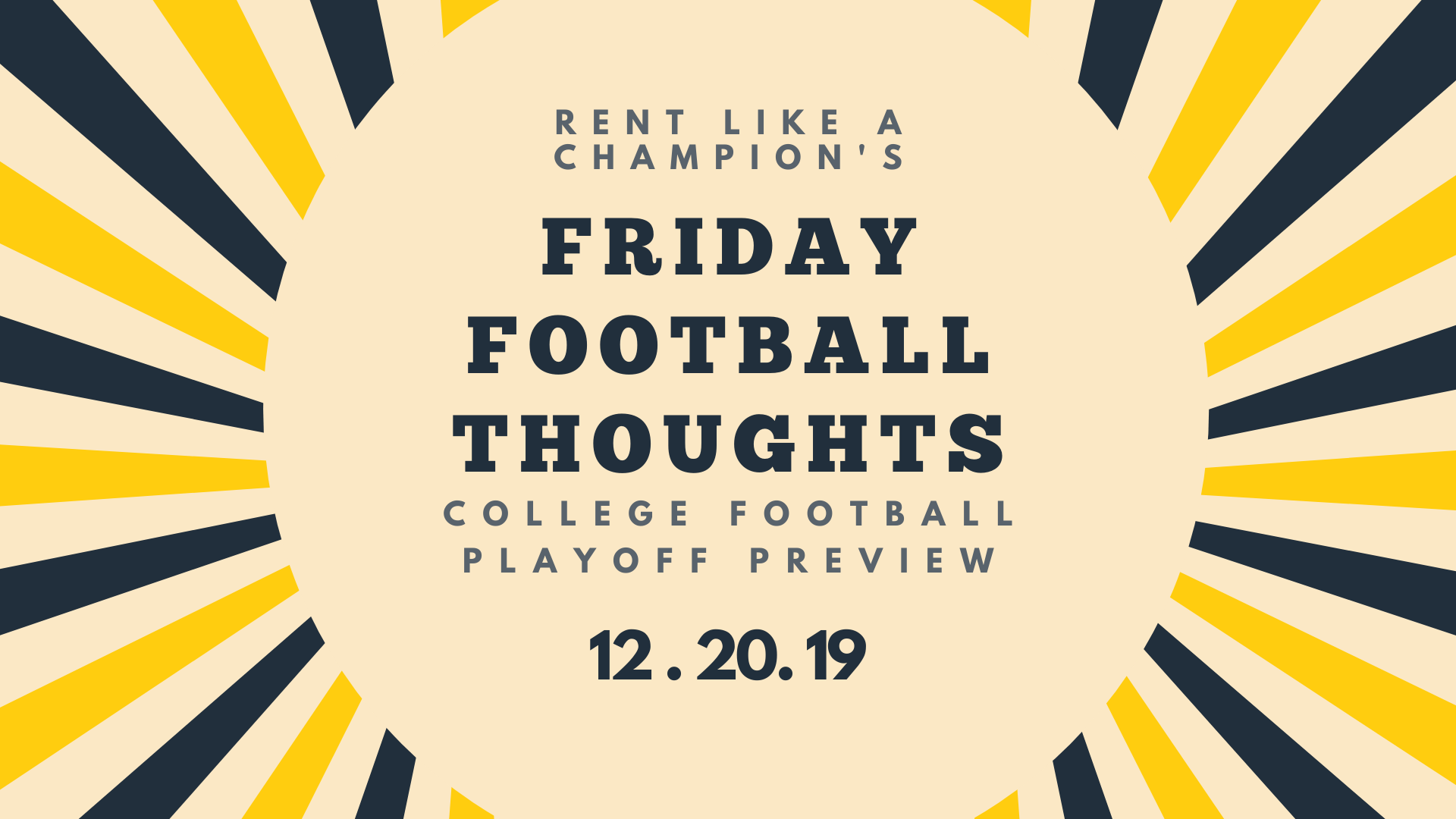 In a little less than a month, the last game of this incredible college football season will end as the confetti falls after the CFP Championship game in New Orleans. But, today, my time with you this season ends with one last Friday Football Thoughts. Thank y’all so much for being a great audience and allowing me to share my passion for college football with you this season.

The 13.5-point spread is tied for the second-largest spread in CFP history. Only last year's semifinal matchup between Alabama and Oklahoma had a larger spread, as Alabama was favored by 14.5 points. In that game, Oklahoma beat the spread, but I don’t think the Sooners can keep up with LSU’s pass attack. Oklahoma’s offense is balanced, averaging 303 passing yards and 251.2 rushing yards per game. LSU averages 386.8 yards through the air and 167.5 yards on the ground.

Heisman Trophy winner Joe Burrow is the leader of this Tigers team. He has thrown for 48 touchdowns this season and has two 1,000-yard receivers in Ja’Marr Chase and Justin Jefferson to rely on. On the other side of the field, LSU is making its name as “DBU” for its talented defensive backs. Safety Grant Delpit and freshman cornerback Derek Stingley are the leaders of the defense that has 70 passes defended and 16 interceptions this season.

Oklahoma is 0-3 in CFP semifinals, but quarterback Jalen Hurts has championship game experience from his time at Alabama. The Sooners were the best defense in the Big 12, an area in which they have struggled over the past few years. Oklahoma allows just 24.5 points per game, but the Sooners haven’t faced an offense anywhere near as prolific as LSU’s offense that averages nearly 48 points per game.

I think this will be a fun, high-scoring contest, but LSU has been on a different level from Oklahoma this entire season. I’ve got the Tigers winning this game 52-35 and earning their first championship game appearance since 2012.

This game should be one of the best games this year. Ohio State has been dominant all season and leads the country with 48.7 points per game. Clemson has rolled through its schedule as well and is just three spots behind the Buckeyes with 46.5 points per game.

Ohio State running back J.K. Dobbins has rushed for 1,829 yards and 20 touchdowns in a historic season. Ohio State relies on the run, and Dobbins delivers by averaging 6.5 yards per rush. Quarterback Justin Fields has added 10 touchdowns on the ground, but his excellent decision-making is what makes the Buckeyes so dangerous. He has thrown only one interception all season in 308 passing attempts. Limiting turnovers will be important for Ohio State, as Clemson’s defense has forced 28 turnovers this season.

Clemson quarterback Trevor Lawrence has benefitted from some of the country’s best offensive line play; he’s only been sacked 12 times in 13 games this season. Keeping him upright will be a challenge against Ohio State’s quick defensive front. Ohio State defensive end Chase Young leads the nation with 16.5 sacks, and anyone in the Buckeyes’ front seven is capable of putting pressure on the quarterback.

I’ve gone back and forth on this pick, and even as I type this, I still think this game could go either way. But, Clemson has a bit of a chip on its shoulder (deserved or not, you can decide) after never really being in the top-two conversation due to its weak schedule. I think that extra edge that Clemson will play with is the difference in this game. I’ll take the Tigers 35-34.

And my National Championship pick is….

LSU. The No.1 seed has never won the CFP, but I think this year is when that streak ends. LSU is a complete team, and Coach O is the perfect guy to lead the Tigers to a national championship just about 80 miles from campus. The parties on Bourbon Street would last for days if LSU won in its home state, and that sight on its own is almost worth picking LSU to win.

A huge thanks to Betsy for all of her fantastic work this season on all of our recaps and Friday Football Thoughts series! To keep following along with Betsy all year long, find her on Twitter @BetsyGoodfriend!

Bowl games you're not talking about (but you should be)
Cotton Bowl Preview: Penn State and Memphis meet in Arlington 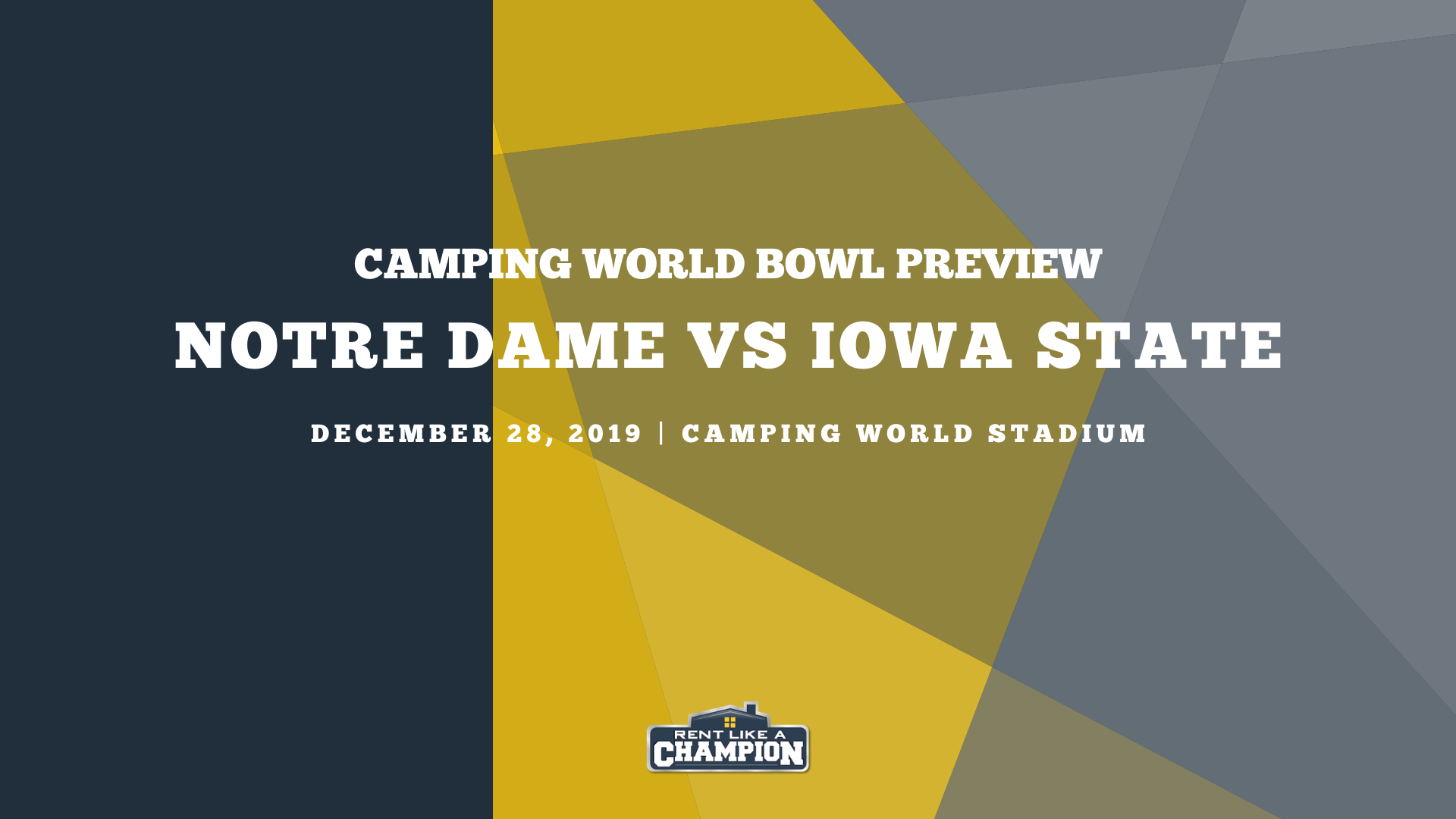