Michigan at Wisconsin: Preview, keys to the game, and predictions 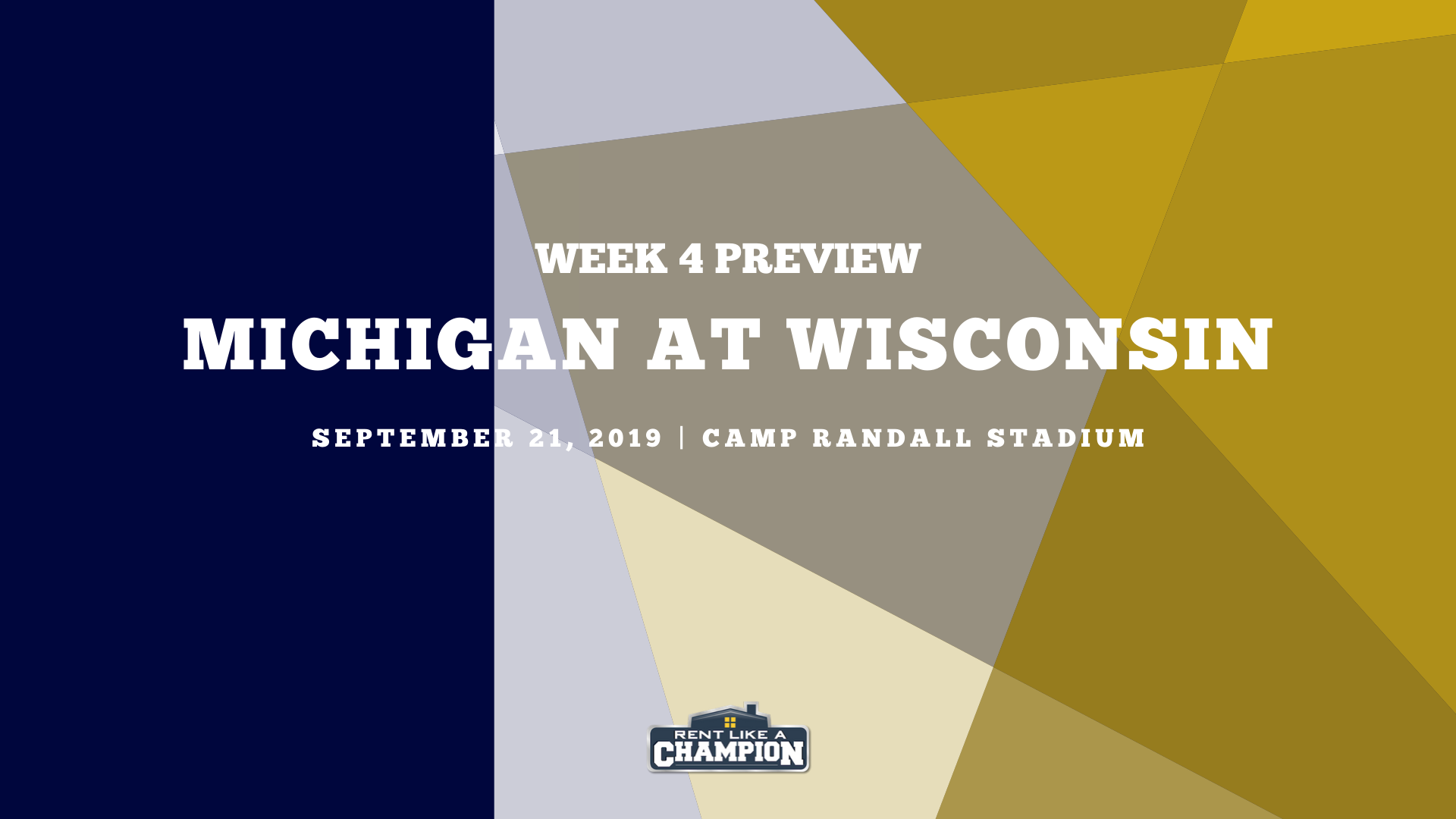 Michigan returns to action this weekend after a bye week, following their near-loss at home to Army in week two. The Wolverines haven’t quite looked like the dominant team we expected them to be when the year began - but a third win on the road against a surging Wisconsin Badgers team will do wonders to make us forget those early season stumbles.

ABOUT THE WISCONSIN BADGERS

It’s rare that two games against a team can serve as such a clear microcosm of their entire program’s trajectory - but I would argue that such is the case for Michigan’s match-ups with Wisconsin each of the last two years.

In 2017, Wisconsin took care of business against the then-19th ranked Wolverines, pulling away in the second half with their patented brand of physical running, punishing defense, and disciplined play, to walk away with the 24-10 victory. It was a style they played at all year long, and, as it did in their match-up with Michigan, it always seemed to work. They would go undefeated in the regular season, narrowly lose to Ohio State, then pummel Miami in the Orange Bowl. Heading into the following season, they were the #4 team in the country, with all the promise of a College Football Playoff berth in front of them.

But when Wisconsin visited The Big House in 2018, the Wolverines were met with a very different team - one that fell 38-13 to Michigan in a game that didn’t even feel that close. Injuries and a lack of depth hurt them, as did simply a lack of sharpness throughout the night - a trend that would, you guessed it, haunt them for the rest of the season. They would finish 8-5… and as 2019 kicks off, we wondered what version of this team we would get.

All of this makes this Michigan game rather poetic, because though Wisconsin has looked absolutely dominant thus far (they’ve yet to allow a single point the entire season), this match-up with the Wolverines will be their first real test… and our first indication of precisely what kind of Badgers team we can expect this season…

For what could be the final year, the Wisconsin Badgers offense is built primarily around RB Jonathan Taylor, who - despite the Badgers’ struggles - finished 2018 leading the country in yards per game (168.77, more than 20 yards ahead of the 2nd ranked player) and total yards (2,194), while rushing at a clip of more than seven yards per carry and finishing with 16 touchdowns.

He also led the country in rushing attempts per game at 26.6 carries per game, a number that I expect to stay relatively even this season with the transfer of last year's Badger QB, Alex Hornibrook, to Florida State.

And while blowouts in the Badgers' first two games has limited his action just a bit, he’s already averaging over 118 yards per game (12th in the country), so once Wisconsin starts playing him for full games in the B1G, I’d expect for Taylor to find himself at the very top of the country’s rushing numbers.

That said, doing so won’t be without its difficulties. Wisconsin more or less has to start over on the offensive line - save for C Tyler Biadasz, the Badgers lose basically everyone up front. And while the receiving core remains more or less in tact, QB Jack Coan - though solid to start 2019 - is still unproven, and so whether or not he’s able to provide adequate balance for Taylor to get free is a matter yet to be resolved.

Now, all this said, of course, Wisconsin’s raw stats simply can’t be overlooked - they’re third in the country in points per game at 55, and are averaging over 500 yards per game, to boot. Still, they’ll need to prove they can do it against the best defenses in the B1G, and against Michigan tomorrow, the Badgers will get their answer pretty quickly.

This is going to sound strange, but Wisconsin’s defense has been almost too dominant to take seriously heading into this game.

We’ve mentioned their zero points allowed thus far, but the deeper stats are even more jarring - 87 yards allowed per game passing, 29 yards per game rushing (116 yards per game allowed total), all of which lead the country. Granted, USF and Central Michigan aren’t exactly running a Lincoln Riley playbook, but USF was the 69th ranked offense in the S&P+ a year ago, while Central Michigan returned tons of experience at almost every position. At the very least, holding two FBS-level teams scoreless to start out the year is an impressive feat, no matter who you’re playing.

In terms of the specifics, it’s the run defense that should concern Michigan the most. Where both USF and CMU both had passing attacks well into the bottom tier of the country, USF notably featured RB Jordan Cronkrite, who logged 1,100+ yards in 2018.

The Badgers held him to just nine yards on six carries.

They’re led by linebacker Zach Baun, who already has 3 tackles for a loss, 2 sacks, and a forced fumble in this young season - and while many expected the loss of Olive Sagapolu to be detrimental to defensive interior, in their last game we saw freshman nose tackle Keeanu Benton step in and make some serious moves. We’ll see if he gets more action against Michigan, or if the usual starter Bryson Williams pops back in. Regardless, one thing appears clear: this entire front seven could be an absolute handful.

The secondary has yet to be really tested this season (USF and CMU ranked 95th and 129th in passing S&P+, respectively, heading into 2019), but the bones are there. They lose safeties D’Cota Dixon and Evan Bondoc, but return basically everyone else from a solid pass defense a year ago (58th in pass defense S&P+, 22nd in yards allowed per game) - so if Michigan is going to come away with a victory in Madison, Shea Patterson will have to play his best game of the season thus far.

Keys for the Wolverines

Playing on the road, in Camp Randall, the worst thing you can do is allow self-inflicted mistakes to put you out of the ballgame.

Over their first two games, Michigan's inability to hold onto the football was almost baffling - they fumbled the ball eight times, and lost five of them. Were it not for the five turnovers gained by Don Brown’s defense, things could be much, much worse.

Against a Wisconsin team that is firing on all cylinders (on both sides of the ball), there won’t be any more room for error - one turnover at the wrong time could cost Michigan the game.

And as for Patterson, he’ll need to take advantage of the fact that despite their stellar play thus far - this secondary could end up losing a few of the match-ups on the outside against Michigan’s receiving core. He needs to make the right reads and get the ball out quickly, lest he fall prey to the Badgers’ front seven.

This game is the tale of one team who’s struggled to get their footing thus far in 2019 (Michigan), and another who already looks halfway up the mountain (Wisconsin).

So if Michigan is going to win, it will have to begin with a strong start that knocks Wisconsin off their rhythm in the first quarter. Defensive stops are key early, but so too will be showing that Michigan can move the ball and score on the Badgers. It sounds rudimentary, but if Michigan falls behind by more than 10 points in the first half, the game could already be over.

My guess is Patterson comes right out and moves the football on the first drive against Wisconsin, taking shots deep to put the Badgers secondary on their toes early. From there, if they’re able to couple those big plays with more dependable quick routes, Michigan could actually stun Wisconsin by leading at halftime.

And once Michigan gets a lead, then it’s just up to Don Brown to play a little chess against the opposing Badgers' offense, who will not have seen anything quite like this Wolverines defense yet this season… and who may not be able to prevent Michigan from walking away with the upset.

Michigan will be picking up the action in Ann Arbor again soon...

Will you be there to cheer them on?

At Rent Like A Champion, we have more than 100 weekend home rentals in Ann Arbor right now, available for all of Michigan's biggest match-ups in 2019! Click below to search all of our options now, and get your team into the game...

Friday Football Thoughts: Week Four's Gonna Be Wild, Y'all
Notre Dame at Georgia: Preview, keys to the game, and predictions