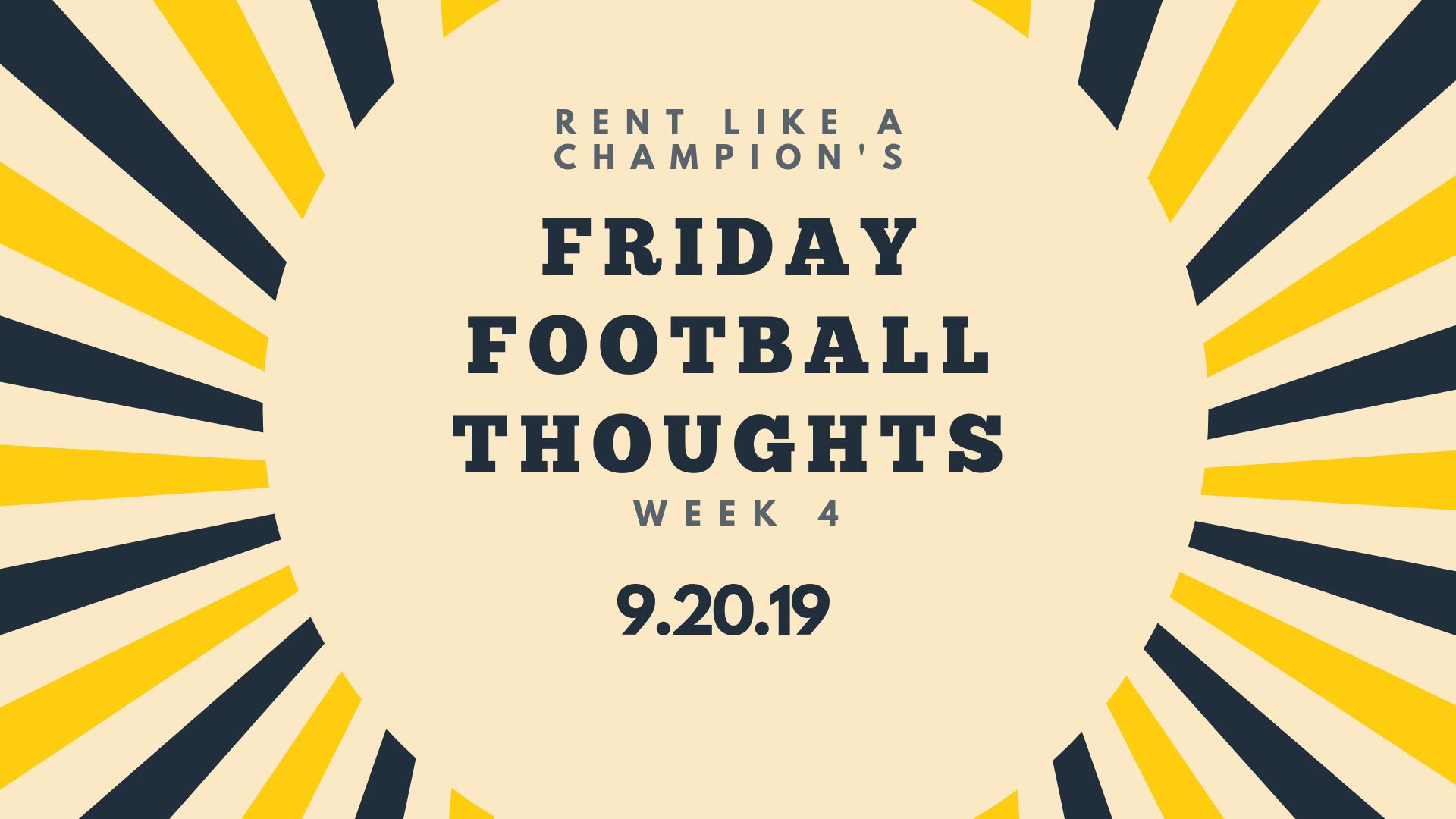 In the dog days of summer, as we sit around waiting for the college football season to start… it’s these kinds of weekends we wait for.

Marquee match-ups, conference kickoffs, and as the weather starts to chill even just a tad these games start to matter that much more, bringing the top-tier of this year’s playoff hopefuls into focus.

And for the teams that will be put under the national spotlight this weekend, their performance could very well end up determining whether they’ll find themselves among those hopefuls, or if it will be another summer sitting, waiting, and… thinking of what could have been.

Here’s what we’re looking forward to this week…

For all of the early statements made thus far in the young 2019 season, two teams in the College Football Playoff purview have been largely absent from the national conversation: the Georgia Bulldogs and the Notre Dame Fighting Irish. This is understandable, of course, given that neither has played in a particularly challenging or high-profile match-up yet this year - but even so, the chatter’s been a little quiet in Athens and South Bend so far.

That all changes this weekend.

Just over two years after these two squads met in South Bend, Notre Dame will travel down to face the Dawgs in a titanic clash that should give us our first real glimpse into just how good both of these teams are.

For Georgia, QB Jake Fromm (who’s first start came in that 2017 game against the Irish) hasn’t just dealt with the turnover at the receiving position - he’s thriving in it (he's posted a career best 194 QB rating through three games in 2019), and true freshman receiver George Pickens is a huge reason why. Pickens leads the team in receptions and receiving yards, and at 6’3” 190 lbs, his physicality and explosiveness is something that the Fighting Irish must account for.

And on the other side, while Notre Dame has an incredibly talented roster led by their own star QB in Ian Book… they haven’t quite been convincing in their dominance through their first two games. They’ve suffered from slow starts and inconsistent execution against Louisville and New Mexico, two teams that really didn’t present a threat from a talent standpoint. It's a trend they simply won’t be able to continue against the Dawgs, who will no doubt be fired up by the 100,000 fans expected to pack into Sanford Stadium. Add that to Notre Dame's recent shortcomings in top-5 clashes (they haven’t won a game against such opponents since 2005, and were most recently beaten handily in last year’s CFP against Clemson), and this game becomes more than just an early season clash for the Irish - it’s yet another referendum on the state of their program when compared to college football’s elite.

All of this will be set against a simple backdrop: the winner will be solidified as a favorite to make the playoff come January and will control their own destiny along the way, while the loser will face a remaining schedule in which every game will be a must win to even have a shot… so it will all be on the line Saturday night in Athens.

Game That’s Going to Tell Us the Most:
(11)Michigan at (13)Wisconsin

Both Michigan and Wisconsin are a bit of a mystery.

At 2-0, Michigan has all of the talent on paper this season to challenge the two-year B1G champion, Ohio State. They have a proven, veteran QB in Shea Patterson, a fantastic group of receivers for him to throw to, and a defense that, once again, looks poised to be one of the country’s most dominant units week in, and week out.

And yet even with that 2-0 record… the Ann Arbor faithful haven’t gotten their legs under them quite yet. A slow start against Middle Tennessee State in week one was forgiven as early season rust - a near upset against Army that took two overtimes to finish brought about a few more questions, especially while Shea Patterson and the Wolverines’ offense struggled to hang onto the football.

Wisconsin, on the other hand, didn’t come into the season with the “on-paper” prestige of Michigan - but they’ve certainly played like they’re ready to challenge for a conference championship. In two weeks of play, their defense hasn't yielded a single point, while their offense - behind Heisman candidate Jonathan Taylor - lands 3rd in the country in points per game (55), and is currently notching over 500 yards per game, as well. But though they’ve been able to do this against FBS competition, that FBS competition has been South Florida and Central Michigan; they're the kinds of opponents you expect Wisconsin to absolutely demolish - albeit perhaps not to such a dominant degree.

So, what do the 2019 iterations of these storied programs actually look like? That's the million-dollar question coming into Saturday.

Did Michigan just need a few games to work out the speed bumps in their new offense under first-year offensive coordinator Josh Gattis? Or are these performances indicative of a team whose raw talent will be more appealing than its ability to put it together by season’s end?

And is Wisconsin really the dominant, balanced team they’ve looked like through two games? Or are they benefitting from badly played games by bad teams - destined to find their true level once real competition gets thrown in front of them?

By the time we walk away on Saturday afternoon, my guess is we have answers to these questions… and the B1G pecking order will come a bit more clearly into focus.

This is the SEC West’s ultimate “prove it” game. Both Auburn and Texas A&M are hard to predict each season, but both have the talent capable of competing with the upper tier of the SEC. The winner of this game could be well on their way to being in the same conversation as LSU, Georgia, and even Alabama.

Texas A&M is led by quarterback Kellen Mond, whose inconsistency has not improved much in his third year as the Aggies’ starter. Mond completed just 57% of his passes against Clemson, the only true competition the Aggies have faced this season. In Texas A&M’s 24-10 loss to the Tigers, he never looked comfortable.

On the other sideline, Auburn starts true freshman quarterback Bo Nix. Nix grew up a lot in the Week One win over Oregon, and he has shown signs of better decision-making in the last two games against Group of Five competition.

The key to this game will be the defensive lines. The team whose line can get the most pressure on the quarterback and force him to make poor decisions and throws will win the game.

Texas A&M’s defensive line is inexperienced and has just five sacks this season, while Auburn’s d-line is one of the most talented units in the country, led by two potential first-round picks. My money’s on Auburn this week.

The action across the country is picking up… and you’re running out of time!

With college football season in full swing, you’re running out of time to find the perfect game day getaway for your group’s trip this season! Rent Like A Champion has over 4,000 weekend home rentals close to college football’s biggest stadiums, so click below to get on your way right now…