Michigan vs. MTSU: Preview, Keys to the Game, Predictions 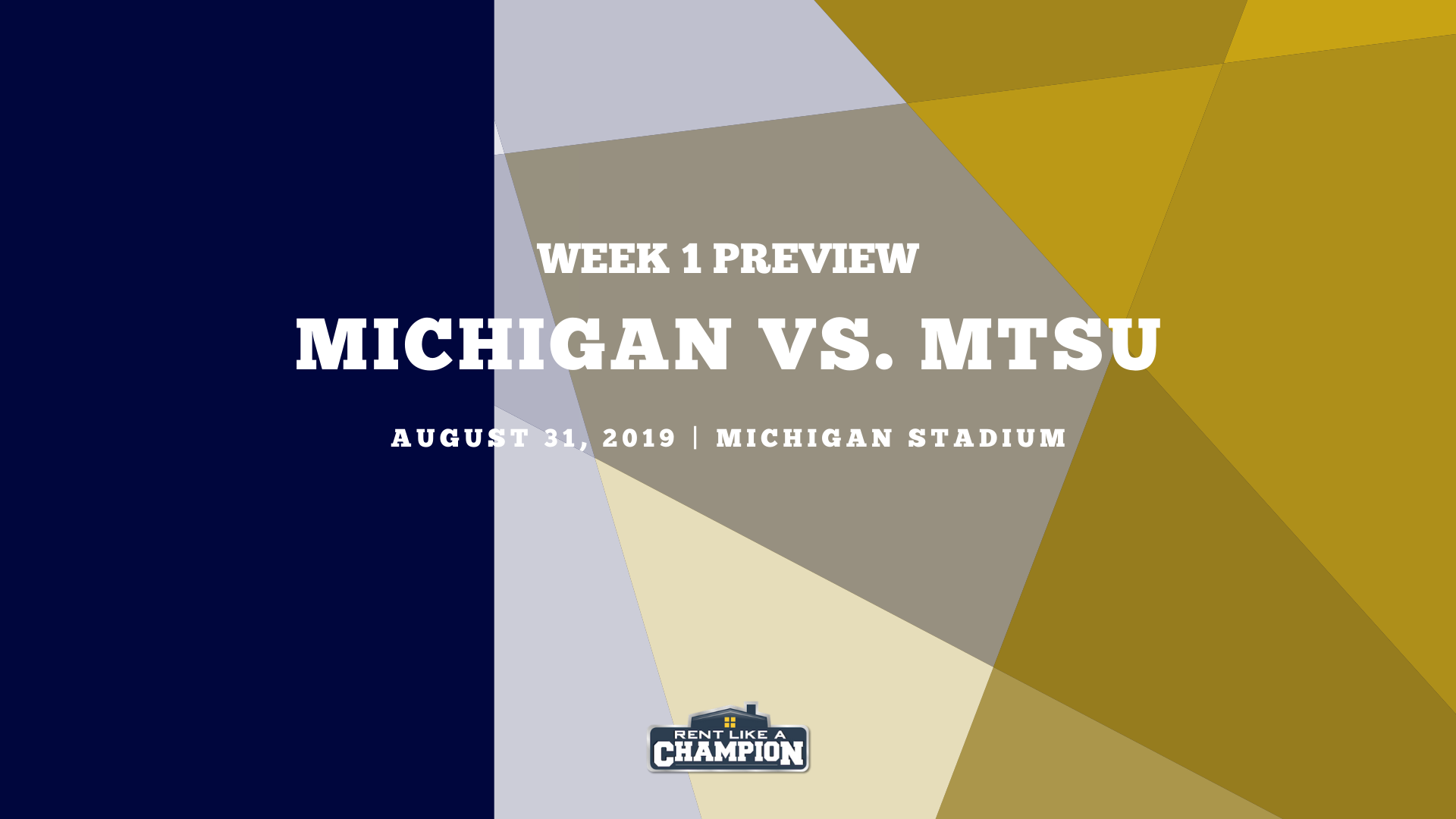 As 2018 wrapped to a close, Michigan fans were right to feel a bit let down by the end result. After all, a year that, for so long, seemed to point to at least a shot at college football’s most coveted prize… ended on a cold day in Columbus, then was slammed shut against Florida in the Peach Bowl.But Saturday begins a new year, and a new chance for the Wolverines to get themselves back on track. With an experienced core and as much talent as you’ll find anywhere in the B1G… it could be the start of something big.

First up? The Blue Raiders from Middle Tennessee State.

Let’s break it down…

It’s easy to get caught up in top Group of Six teams like UCF, Boise State, Appalachian State - and other such programs that have nosed their way into the national conversation of college football.

But success as a smaller conference squad doesn’t always come in terms of giant upsets, or the sudden ascension into the top brass of the sport’s rankings.

Sometimes success is the kind that coach Rick Stockstill has found in his 14 years in at Middle Tennessee State - where he’s amassed a more than solid 52.7% winning percentage, and taken the Blue Raiders bowling eight times (though he’s only won twice).

In 2018, MTSU won their first East Division title and went to the Conference USA Championship game - and while they would fall to UAB (and then face resounding defeat against Appalachian State in the New Orleans Bowl), all-in-all, it was once again a solid outing for Stockstill and the Blue Raiders.

Their 2019 campaign begins by going through Ann Arbor, and here’s what to expect…

Coach Stockstill’s first task in 2019 will be to replace his son, Brent Stockstill, who was a four year starter at Middle Tennessee State. During that time, he threw for over 12,400 yards, 106 touchdowns, and clocked in a fantastic 148.1 QB rating by the time it was all said and down. Needless to say, replacing him will be a tall order.

Understandably, there’s a lack of experience behind Stockstill as to who could take over. As of this writing, it’s not clearly precisely who will get the nod, but you can bet on either junior Asher O’Hara (who has 20 career passing attempts), or sophomore Chase Cunningham (who has none). Whoever does get the ball, however, will have two serious issues: a lack of experience in the receiving game, and huge turnover along the line.

To the former, the bright spot is that last year’s leading wideout, Ty Lee, is back. The 5’9” speed receiver in the slot caught 71 passes for 883 yards and seven touchdowns in 2018 - and will no doubt be the focal point in an offense that was one of the country’s most explosive a year ago (37th in the S&P+). But after him… the next four leading receivers are all gone, so if Lee gets locked up early, it’s unclear who will get targets for the Blue Raiders.

And then there’s the line, which loses three of their most experienced starters heading into this season - and which could become a problem against the aggressive Michigan defense.

The name to remember is Scott Shafer - because the work Middle Tennessee’s defensive coordinator has done the last two years will surely warrant a head coaching job at some point in his future. The Blue Raiders were 103rd in defensive S&P+ after the 2016 season, then following Shafer’s arrival in 2017, they jumped to 62nd in 2017, then 68th in 2018.

And in 2019, it looks like that trend will continue.

The major thing they’ll need to replace is the secondary, which loses *checks* all of their top cornerbacks, along with safety Welsey Bush.

However, if they can get production out of senior Chris Stamps and junior Justin Brown, everything else is looking pretty solid for the Blue Raiders.

Safeties Reed Blankenship and Jovante Moffat are both fantastic over the top, and should provide plenty of cover if the cornerbacks get burned to prevent the big play. Meanwhile, the linebacking group may lose middle linebacker Darius Harris’ 73.5 tackles and 12 tackles for a loss - but they return Khalil Brooks, DQ Thomas, and Cody Smith, all of whom should more than handle the load.

Add all of this to Shafer’s penchant for aggressive play-calling (36th in havoc rate a year ago), and the Blue Raiders should field a pretty tough scheme this season.

Keys for the Wolverines

Bring the pressure on defense

If there’s any possibility of the Blue Raiders keeping this game close, it will happen on the defensive side of the ball - as Shafer is a talented mind who will no doubt be looking to disrupt Shea Patterson’s groove right away.

So the best thing the Wolverines can do is return the favor by taking advantage of an inexperienced QB, behind an inexperienced line, throwing to inexperienced receivers on the road against a far superior opponent. If Don Brown’s unit can get into the backfield right away, it will stop this offense long before Ty Lee can cause any kind of a problem - and make up for any lag the offense might have getting going in Week 1.

As complimentary as I’ve been of Middle Tennessee State thus far, in guessing what will happen... one need only look at recent history.

Last year, a Blue Raiders team with far more offensive stability and just as much defensive prowess took a similar trip in the non-conference, heading to Athens to take on the #3 Georgia Bulldogs… and were promptly beaten 49-7.

This game, I expect, will go similarly - if for no other reason than Michigan’s offense just has too many weapons in the passing game that will take advantage of the Blue Raiders one blind spot at cornerback.

The Blue Raiders may get a few stops early, but it won’t feel competitive by halftime. Wolverines roll, folks.

Still planning a trip to Ann Arbor? We can help!

College football may be kicking off this weekend, but there’s still plenty of time to plan your trip to Ann Arbor this season! We have over 100 homes available close to The Big House this season, so click below and get your group into the action right now...