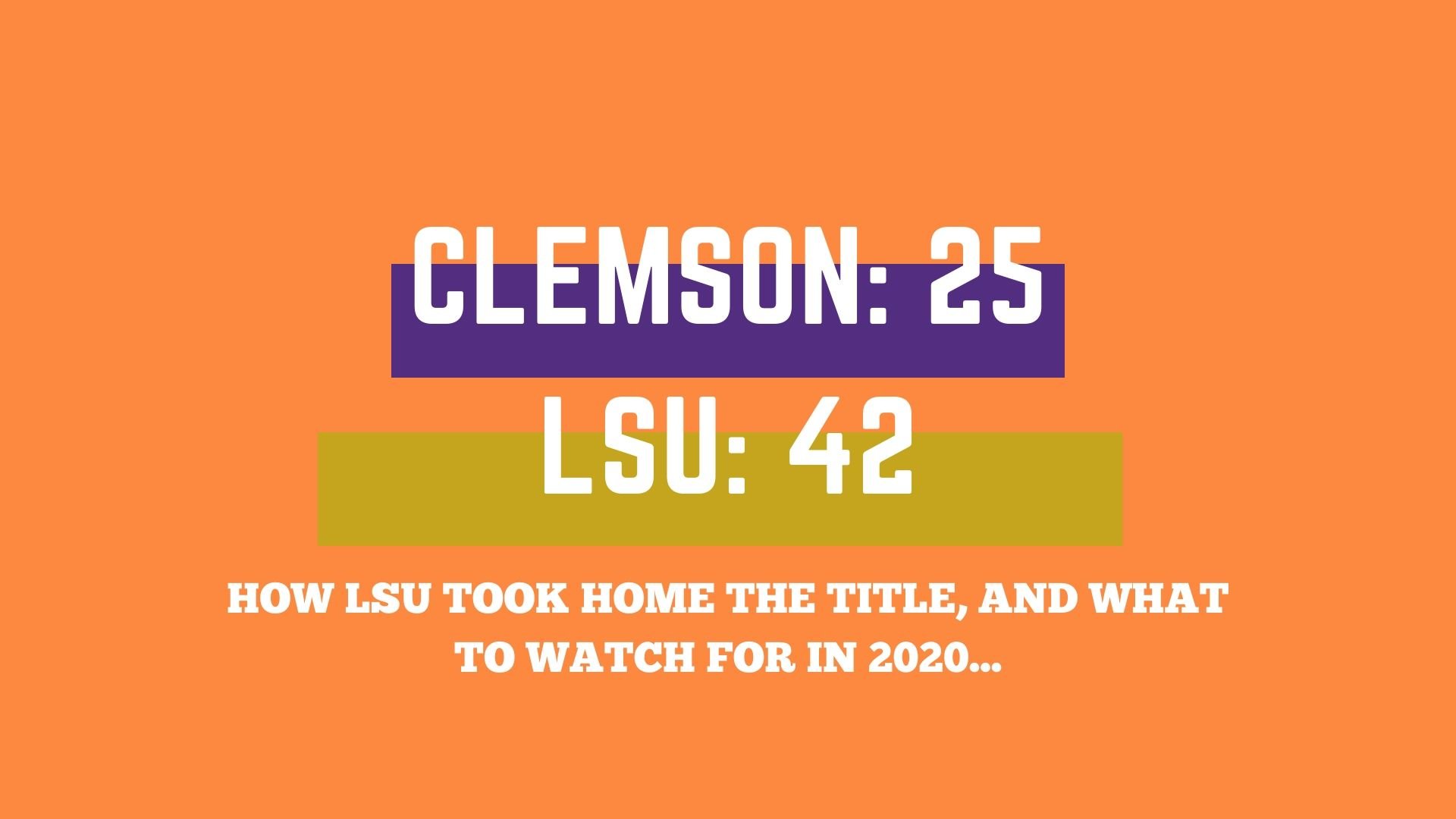 Another college football season is in the books, and after one of the most historically dominant years in the sport’s history - the LSU Tigers stand alone on the mountaintop.

It was a game whose final score of 42-25 was ultimately a bit misleading; this was much more of a back and forth affair than a 17-point final margin would suggest. But LSU nonetheless left no doubt in New Orleans as the final whistle sounded - they are the best team in college football in 2020, and, given their body of work, may turn out to be one of the greatest college football teams of all time.

But we’re getting ahead of ourselves. Let’s start with some key takeaways from college football’s biggest night at the Superdome...

Joe Burrow capped his historic season off with a historic performance

It’s hard to overstate the magnitude of what Joe Burrow just accomplished: 76.3% passing, 5671 yards, 60 touchdowns, 6 interceptions, and a final passer rating of 202.0.

His final performance - against perhaps the best defense he’s ever faced - wasn’t quite the dominant display we saw against Oklahoma (then again, there have been few performances like it in the history of the game). He faced mountains of pressure from Brent Venables’ defense, took five sacks, and had his lowest completion percentage of the season (which, to be clear, was still a solid 63.3%).

But looking at the box score, you wouldn’t have known any of that. His final stat line of 463 yards and five touchdowns passing to go along with another 58 yards and a touchdown on the ground is one of the best individual performances in a national championship game in recent memory.

But what made this game so quintessentially “Joe Burrow-esque” was how he got it done: needle-threading 30+ yard bombs to his receivers, escaping the pocket and getting creative with flip passes that broke for huge gains - every time it appeared Clemson had an answer for Burrow, he would do something else that just made you shake your head and say, “Wow.”

It feels disingenuous to only focus on Burrow. After all, who knows where LSU would have been without the 110 yards from Clyde Edwards-Helaire on the ground, or some of the downright sensational grabs his receivers made throughout the night. Football is, after all, a team sport - and Burrow certainly didn’t do it alone.

But time and time again, it was Burrow that provided the life when LSU appeared to be wavering in the face of their toughest opponent to date. It was a win for the entire LSU team, but it’s one that we’ll remember primarily as the night Burrow - ehem, sorry, Bureaux - etched his name into college football history.

It’s been 29 games since we’ve said it, but last night, Clemson was simply outplayed.

Make no mistake, of course: they stayed with LSU round for round, and even with just six minutes left in the game, down 17, you still couldn’t help but think, “They’ve still got a chance.” That’s just who Clemson has been for the past five seasons: a team who you always believed would find a way in the end. They did it against North Carolina earlier this season, they did it against Ohio State two weeks ago… they just couldn’t do it last night.

And like LSU - though for very different reasons - this one ultimately fell on the performance of Trevor Lawrence, who just could never quite find a way to get into rhythm in this game.

He would finish just 18-37 for 234 yards and no touchdowns (the first time he hasn’t thrown a TD pass since a 15-10 victory over Syracuse in 2018), along with a crucial fumble in the fourth quarter that ultimately sealed the deal for LSU. His accuracy felt off, he appeared uncomfortable throughout the night, and, in the end, he walked away with the first loss of his collegiate career.

He certainly wasn’t helped by the fact that both of his top receivers were bottled up by an LSU secondary that played a fantastic ballgame. We talked in the preview about how important the trio of Kristian Fulton, Kary Vincent Jr, and Derek Stingley Jr would be for this team’s success - and they came through in a major way, holding Tee Higgins and Justyn Ross both under 100 yards and just eight catches combined.

Defensively, a costly targeting call against James Skalski may be the talking point, but Brent Venables’ unit simply lost the chess match to Joe Brady’s passing game. They were forced to sell out on the blitz time and time again in an effort to disrupt timing - and for a while it worked. But eventually, Burrow and company found the soft spots with quick screens and draws to Edwards-Helaire, and that was all she wrote.

It’s been one of college football’s greatest runs, and this loss shouldn’t take anything away from the outstanding program Swinney has built in Clemson. If anything, it should have the rest of the country mighty scared for what’s coming next…

Unsurprisingly, Clemson is already the odds-on favorite to win the 2021 national title at 9/4, per CBS. After all, with so much talent returning (most notably, Lawrence will return under center), along with pedigree they’ve established, as well as their relatively weak schedule in the ACC - it’s hard to imagine next year’s national championship in Miami without the Tigers.

But after them… things get much more interesting.

Ohio State will be returning a boatload of talent as they try to get back to the playoff, but they’ll have to go through Penn State on the road - a team with plenty of talent and promise of their own, and who just absolutely smacked Memphis in the Cotton Bowl. Circle October 24, 2020 on your schedule, fans (and if you need a weekend home rental for Penn State vs. Ohio State, we’ve got you covered).

In the SEC, Georgia just landed Wake Forest’s Jamie Newman in the transfer portal - one of the ACC’s best playmakers, and someone with the experience to absolutely dominate in the SEC East (that is, if they can get past Florida…).

There’s Notre Dame, a team that just put together their third straight 10+ win season, returns plenty of experience all over the field, and who will welcome Clemson to the friendly confines of Notre Dame Stadium on November 7 - in what will no doubt be one of the biggest games of the entire college football season (once again, we have plenty of weekend home rentals for Notre Dame vs. Clemson already available!).

And then, of course, there’s Alabama - shut out from the national championship for the first time since the CFP’s inaugural year in 2014. You can bet Nick Saban will have his squad ready to get some revenge come next fall.

But for now, these conjectures and hypotheses will have to wait. The LSU Tigers have claimed the crown, and will be able to celebrate the offseason with the well-earned title of National Champions.

But as any of the 129 FBS teams will tell you as they go back to the drawing board for their own respective off-seasons: that title is up for grabs again in just 228 days.

Rent Like A Champion has over 5,000 vacation home rentals for college football's biggest match-ups in 2020 - and we want to get you the perfect place to stay. Click below to check out all of our lodging options near your team right now...

LSU vs Clemson: Three things that will define this year's national championship
The State of the Program: Notre Dame Football