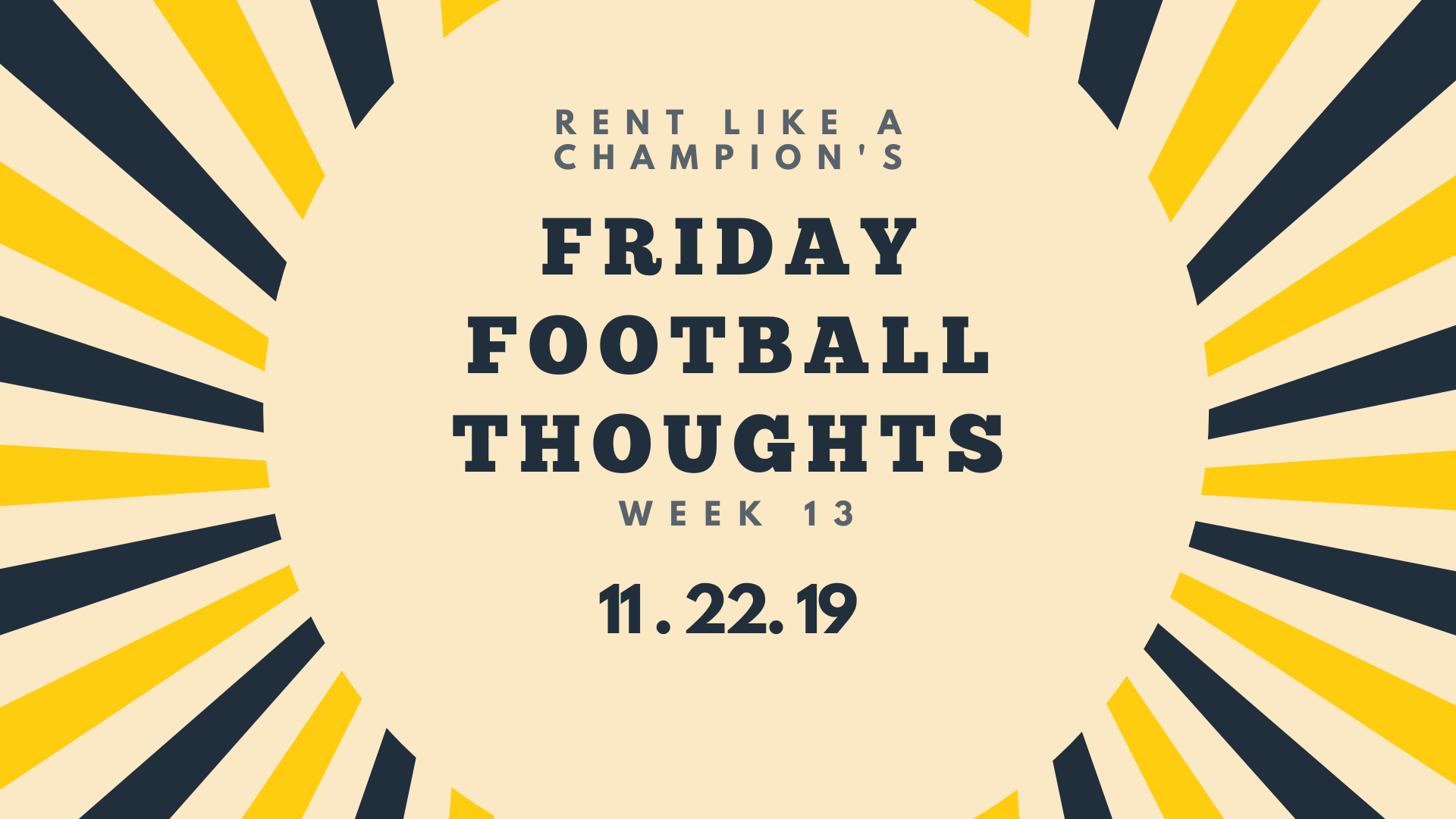 With only two weeks left of the regular season, week 13 is always a bit of a weird one.

On the one hand, we’re a week away from a whole day’s worth of absolutely thrilling rivalry games with conference championship - and even College Football Playoff - implications. Wisconsin will go on the road to take on Minnesota, Alabama and Auburn will square off in the Iron Bowl - and Ohio State-Michigan looms, as always, as a potential program-changing game for both squads.

But even with all that emotion awaiting us… tomorrow’s slate of games could give us some some major upsets, and will carry results that could alter exactly how next week’s match-ups stack up.

Game of the Week
(9)Penn State at (2)Ohio State

For much of the year, Ohio State has been a bit of an enigma in college football. At 1st overall in the SP+ (4th in offense, and 1st in defense), the Buckeyes are statistically the most impressive team in the country. They feature two of the country’s most prolific offensive threats in Justin Fields and JK Dobbins, and it’s arguable that neither of them is the team’s best player. That honor likely goes to defensive end Chase Young, whose 15.5 tackles for a loss, 13.5 sacks, and five forced fumbles are made all the more impressive by the fact that he was suspended for two games this season.

But despite this acclaim, we’ve yet to really see them in a marquee match-up yet this season. The closest they’ve come was their match-up against Wisconsin, but that has been slightly dampened by the Badgers’ performance the rest of the year, which has included an inexplicable loss to Illinois and an overall cooling of their early-season dominance.

For what it’s worth, though: Ohio State won that game by 31 points.

But this weekend, the Buckeyes get their biggest chance yet to show just how good they are on the national stage - as Penn State, currently ranked 8th in the College Football Playoff ranking (9th in the AP, as reflected above), is Ohio State’s first top ten match-up of the year. The Nittany Lions are coming off of two hard fought games - one a loss to Minnesota, and the other a narrow win over Indiana - but they have the kinds of playmakers the Buckeyes have yet to see in QB Sean Clifford, WR KJ Hamler, and LB Micah Parsons.

Add in the backdrop of PSU needing this win to stay alive in the Big Ten East and CFP races, and this, more than any game we’ve seen from the Buckeyes this year, will show us just how good Ohio State is.

No, this match-up between the Mustangs and the Midshipmen isn’t the most noteworthy match-up nationally tomorrow - but a quick look at the game on paper, and you can see why this is gonna be a fun one.

At 9-1, SMU is on their way to the program's best season since going 10-2 in 1984 - and they’ve done it largely on the backs of one of the country’s most prolific passing offenses. They’re currently averaging over 328 yards per game (7th), and have amassed 28 touchdowns behind junior QB Shane Buechele.

Of course, no one knows how to run the ball better than Navy, who is leading the country in rushing yards per game behind their always-fickle triple option offense. But unlike past years, Navy has coupled their offensive efficiency with a defense that - save for their trip to South Bend last week - has been phenomenal in 2019. They’re particularly aggressive on that side of the ball, so they’ll put this SMU offensive line to the test throughout the day.

Not only that, but given that the Mustangs and the Midshipmen are 2nd and 3rd in the AAC West, respectively, this game could end up having huge conference implications. The division-leading Memphis Tigers are waiting on a match-up with the 17th ranked Cincinnati Bearcats at the end of the year - and should they lose there, the winner of this match-up becomes all the more important…

Yes. Okay. I get it. My upset pick for the Hoosiers didn’t work out last week against Penn State. But to be fair - the Hoosiers not only made it a ballgame, at times they looked like the better team against the Nittany Lions (PSU ended the game with just a 27% win percentage).

So now, as they return home to take on the Michigan Wolverines, I’m doubling down on my alma mater and taking them for the program-defining upset.

Granted, Michigan has been playing its best football of the season these last few weeks. Behind Shea Patterson, the offense has come alive - capped by perhaps Patterson’s best game in a Michigan uniform last week against Michigan State. He went 24-33 for 384 yards and four touchdowns in the Wolverines’ rout of the Spartans - but against the Hoosiers, he’ll get a much bigger test. Indiana ranks 10th in yards allowed through the air per game, and while they’re in the bottom percentile of the country when it comes to passes broken up and defended, their 37th ranked sack rate could potentially give the Wolverines fits - especially on the road.

Meanwhile, though Michigan’s defense is always tough, Indiana’s offense has been firing on all cylinders - especially if they get WR Whop Philyor back this weekend. They just absolutely torched Penn State for 371 yards through the air a week ago, and have climbed their way up to the 13th ranked offense nationally.

And, of course, with this game being sandwiched between two emotional rivalry games, there’s always the chance that Michigan simply loses a bit of focus and finds themselves down late to Indiana in Memorial Stadium.

Auburn vs. Samford: Preview, keys to the game, and predictions
Notre Dame pulls away from the Eagles, moves to 9-2 with one week left