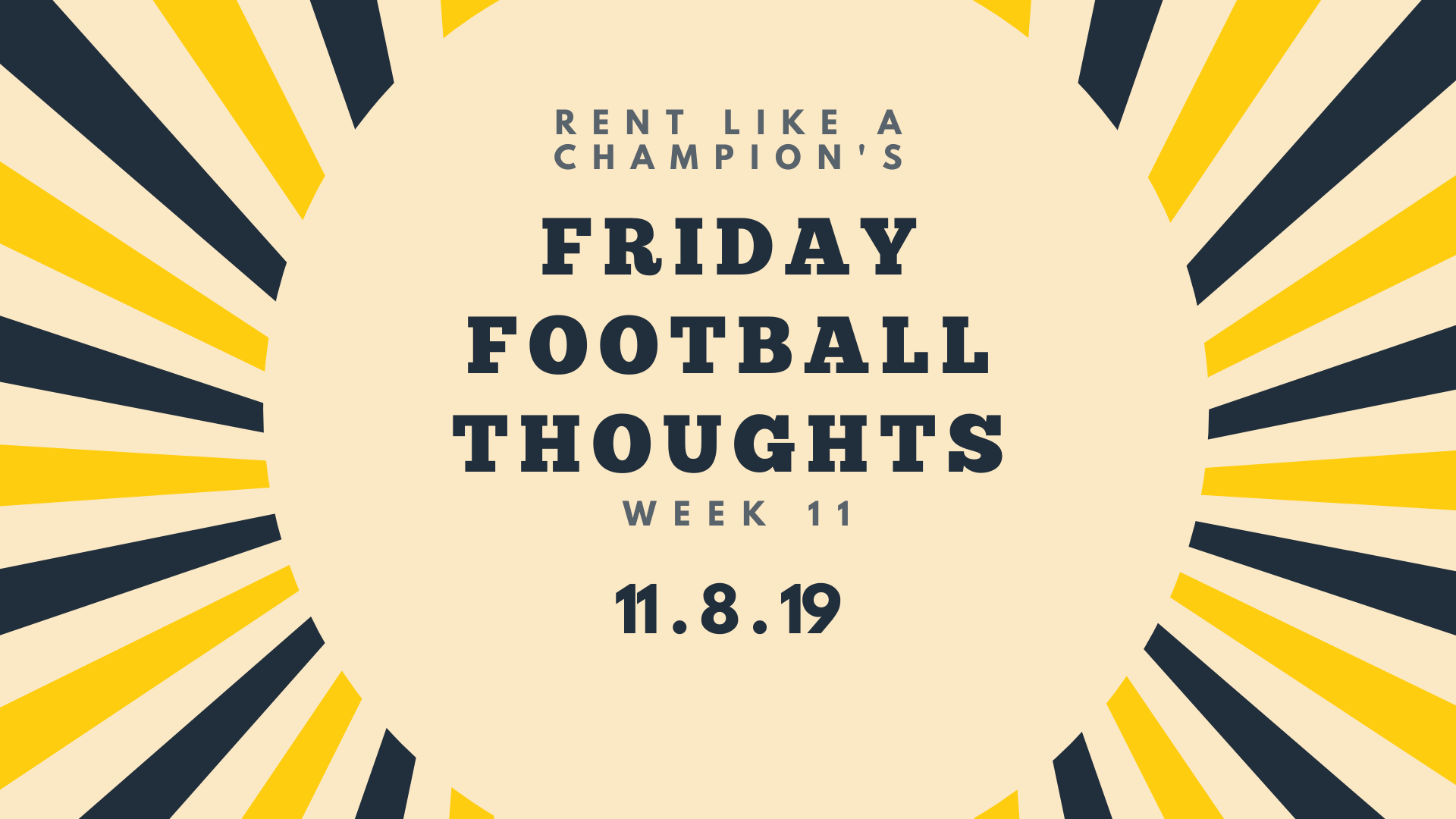 As we get set for another weekend of college football, the theme of the week is “unexpected.”

Who would have thought that QB Joe Burrow would not just be a Heisman favorite, but would be guiding a pass-heavy, undefeated LSU team (whose biggest weakness is their defense) into Tuscaloosa this weekend for what could end up proving to be a College Football Playoff “play-in” game?

Who would have thought that Penn State’s biggest regular season game outside of Ohio State would be coming against PJ Fleck’s undefeated Minnesota Golden Gophers?

And would have thought that a Virginia Tech team that looked lost just a few weeks ago, would be welcoming a 7-1 Wake Forest team into Blacksburg this weekend with momentum on their side, behind one of the fastest-improving defenses in the country?

Yes, sneakily, November’s second week of games will bring some of the season’s wildest storylines to the breaking point - so here’s what you need to know heading into the weekend...

The game we’d been waiting for as soon as LSU became a CFP contender... is here. LSU has proven that it can beat multiple top-10 teams with its new-look, explosive offense, but Alabama is a different beast. The last time LSU beat Alabama was in 2011, when LSU beat the Tide 9-6 in overtime in one of college football’s most memorable games (if you like defense, that is). Alabama avenged the loss two months later in the BCS national championship game.

This game is always one of the biggest of the year, as both teams have been in the top-20 for every matchup starting in 2007. This year’s game will feature two Hesiman candidates at quarterback. LSU quarterback Joe Burrow is second in the country with 30 passing touchdowns and 350.6 passing yards per game. Alabama QB Tua Tagovailoa is expected to play against LSU after his recovery from ankle surgery caused him to miss Alabama’s game against Arkansas two weeks ago. Tagovailoa has thrown for 27 touchdowns and just two interceptions this season. He is second in the country in passing efficiency, while Burrow ranks just behind him in third place.

This is a must-watch game, even though the CBS announcing crew often draws the ire of SEC fans. So maybe watch this game on mute if you can’t stand Gary Danielson. I’ve got Alabama 45-41 in this one because I trust that Alabama head coach Nick Saban will prepare his players to silence the critics who have doubts about Alabama’s weak strength of schedule up to this point. Roll Tide!

The Biggest (and Most Surprising) Game of the B1G Season...

If you had asked me in August which game, through 11 weeks of B1G play, would be the most highly anticipated match-up of the conference season, a noon kickoff in Minneapolis would have been pretty far down the list. And yet here we are.

Tomorrow, two of the three remaining undefeated teams in the B1G will meet, and while one of them - Penn State - is used to the spotlight of a high-profile conference match-up, the Minnesota Golden Gophers are getting their chance to prove they belong among the conference’s best.

Indeed, while the Gophers’ 8-0 record has justified the massive investment they’ve made into the football program over the past decade and a half (including a new stadium and practice facility, along with a contract extension worth seven years, $33.25M for coach PJ Fleck), doubts have lingered around the Golden Gophers’ relatively weak 2019 schedule. Their highest rated opponent thus far has been Nebraska (50th in SP+), and while their run-heavy offense has reached 8th in the offensive SP+ rankings, they haven’t seen anything like this Penn State squad.

And speaking of that Penn State team, fresh off an October during which they legitimized their own 2019 run with wins over Iowa, Michigan, and Michigan State - they’ll look to play spoiler for Minnesota’s fairy tale, and keep themselves in the race for the B1G East, and a potential College Football Playoff spot.

I’ve gone back and forth plenty on this one - but I’ll take Penn State with a second half comeback in this one for a tight victory, 23-20. One thing is for sure, though: this will be a thriller.

Upset Pick of the Week...

One of the quieter stories has been just how much Virginia Tech’s defense has improved over the course of Bud Foster’s last year in Blacksburg - but for those who have been paying attention, it’s really been something special to watch. The secondary, in particular, has been excellent - giving allowing a completion percentage of just 53.4% and racking up six of their eight total interceptions along with 24 of their 32 total passes defended over the last four weeks.

Look no further than the Hokies’ trip to South Bend last week, in which they continuously flummoxed Notre Dame QB Ian Book - picking him off twice - and taking the Irish the distance before losingt by just one point in the final minute of the game.

Meanwhile, despite their 7-1 record, Wake Forest ranks just 46th in the SP+, and depends on a pass-heavy offense behind QB Jamie Newman that will face quite the test this weekend in Blacksburg. If the Demon Deacons find themselves in trouble through the air, I don’t think they have the horses to overcome it on the road at Lane Stadium this weekend. I’ll take Virginia Tech, 27-20.