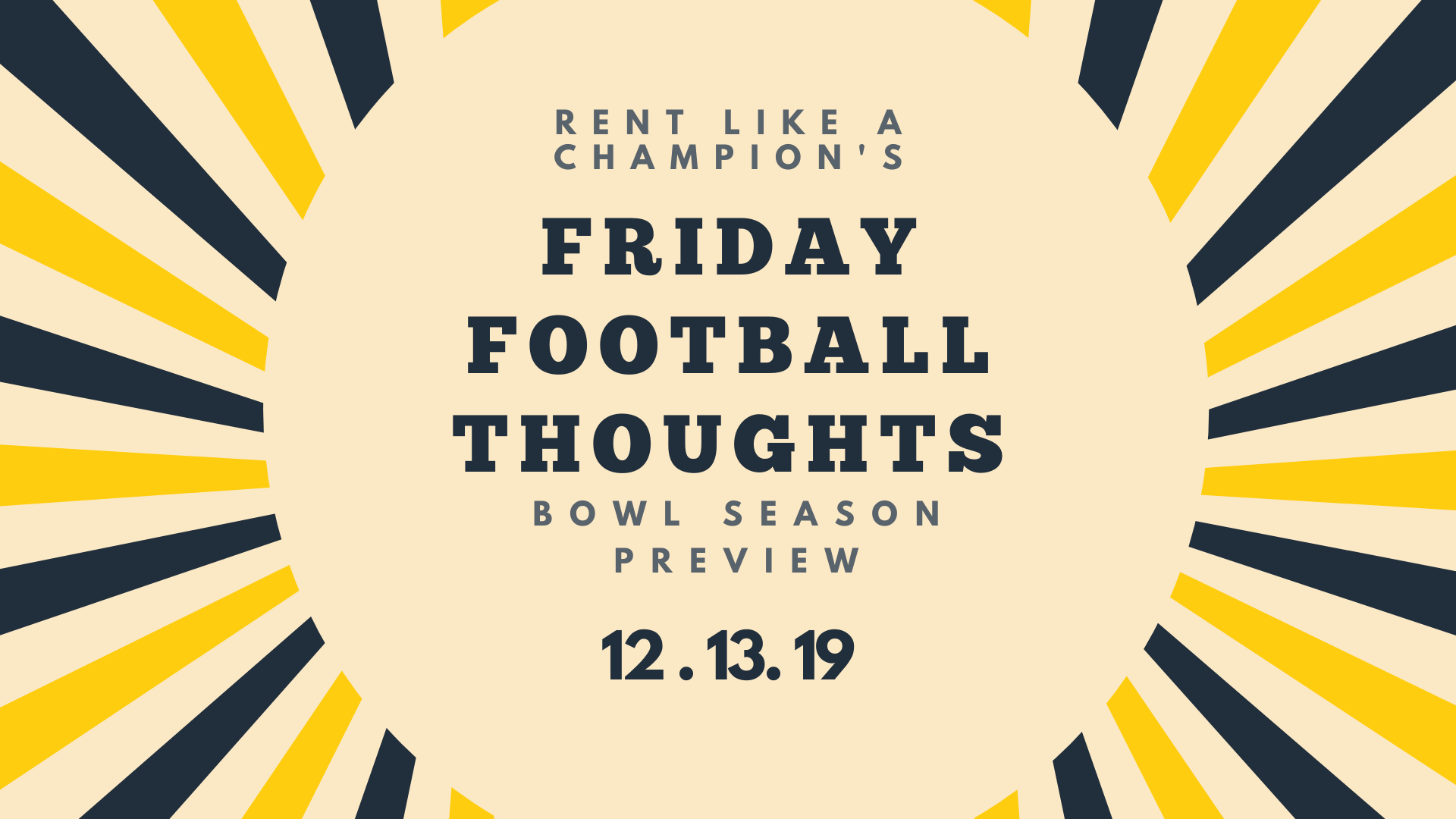 There’s 40 games left in this college football season, and you know what that means: a whole lotta football is about to kickoff.

Bowl games have conference tie-ins that in theory allow better teams from each conference to play each other. Or if you’re Texas, you get to play in the Big 12’s best non-New Year’s Six Bowl because you’re Texas. I’m sure Utah is thrilled with playing a 7-5 Texas team after being a win away from a potential CFP bid.

But even the lesser known stuff is at least... interesting (I’ll be sitting on the couch soaking in every minute of the Camellia Bowl between FIU and Arkansas State because, well, it’s football).

And this bowl season has plenty to be excited about, so here are my three takes from this year’s bowl schedule.

Obviously the Playoff semifinals on New Year’s Eve are big games. But, I think the New Year’s Day slate of the Citrus Bowl, Outback Bowl, Rose Bowl, and Sugar Bowl makes it the best day of bowl season. So good in fact, that I immediately regretted booking a long flight that night. The fact that I am planning to pony up whatever the airline will charge me for Wifi just goes to show how good these matchups are.

No one expected Alabama to be in the Citrus Bowl at the start of this year, but here we are. I think this game is so important for both Alabama and Michigan building into next season. Alabama gets to see what quarterback Mac Jones can do against a quality Michigan team, and Michigan head coach Jim Harbaugh can build more offseason hype with a win over Alabama.

Kickoff at the Outback bowl is at the same time as the Citrus Bowl, effectively dividing sports bars across the state of Alabama. Auburn faces Minnesota in Tampa, and this will be the best game of the day, mark my words. Minnesota shocked everyone by starting 9-0 this season, and they will face a tough test keeping up with a hot Auburn offense.

I can’t forget about the Rose Bowl, arguably the most storied bowl in all of college football. Oregon and Wisconsin face off in Pasadena, and the two teams are about as opposite as you can get. Oregon relies on an explosive quick passing game, while Wisconsin would hand the ball off to running back Jonathan Taylor every single play if it could.

And last but not least, Georgia faces off against Baylor in the Sugar Bowl. If Georgia hadn’t lost to South Carolina earlier this season, the Bulldogs may have been playing in the College Football Playoff, but instead, they’re facing their demons in the Sugar Bowl after losing to Texas in New Orleans last year. Baylor is just happy to be here after a surprising 11-2 season.

Game to watch with teams you’ve never heard of

One of my favorite activities is watching football games with teams that I don’t have a rooting interest in, and yet, developing a rooting interest anyway over the course of the game. So, in honor of this pastime, I’ll give you a game to do this for.

Clear your calendars on the afternoon of December 20th because it’s Bahamas Bowl time. The Bahamas Bowl became famous in 2017, when a Reddit user posted about his experience at the game. It sounds like one big party with a football game in the background, and that’s exactly why this game needs to be appreciated. Charlotte and Buffalo have worked all season to be rewarded with a trip to the Bahamas, and honestly, there’s worse places to spend your winter break as a college kid.

Charlotte head coach Will Healy has turned around the 49ers program in his first season at the helm. After starting 2-5, Charlotte won five games in a row to reach the first bowl game in school history. The 49ers have been celebrating every win this year like it's a bowl game, so imagine the celebrations if they won the Bahamas Bowl. Senior running back Benny LeMay led the C-USA with nearly 128 all-purpose yards per game, and he rushed for 1,037 yards for the season, despite missing two games due to injury. He will surely be giving this game all he has, as it’s his last game in a 49ers uniform.

Buffalo is a fun team to watch if you like not one, but two great running backs. Jaret Patterson led the team with 1,626 rushing yards and 17 touchdowns on the ground. Kevin Marks added 1,008 rushing yards and eight touchdowns. The duo will power Buffalo’s offense in this game, and it will surely be easier to run in the sunny Bahamas instead of the frozen tundra that Buffalo can be.

The Belk Bowl is one of my favorite bowls, solely because of its top-notch Twitter account. Seriously, give this account a follow. Belk announced that this year will be the final year of the Belk Bowl, but the Charlotte-based bowl will continue on, and hopefully so will this account. A great bowl game Twitter account enhances the fan experience and is one of the most underrated aspects of bowl season.

And of course, keep reading Rent Like A Champion this bowl season for all of our analysis as we inch closer to crowning a national champion in 2020!

Friday Football Thoughts: RLAC's Conference Championship Preview
Bowl games you're not talking about (but you should be)