Friday Football Thoughts: The SEC East gets decided, and the west coast could have a surprise... 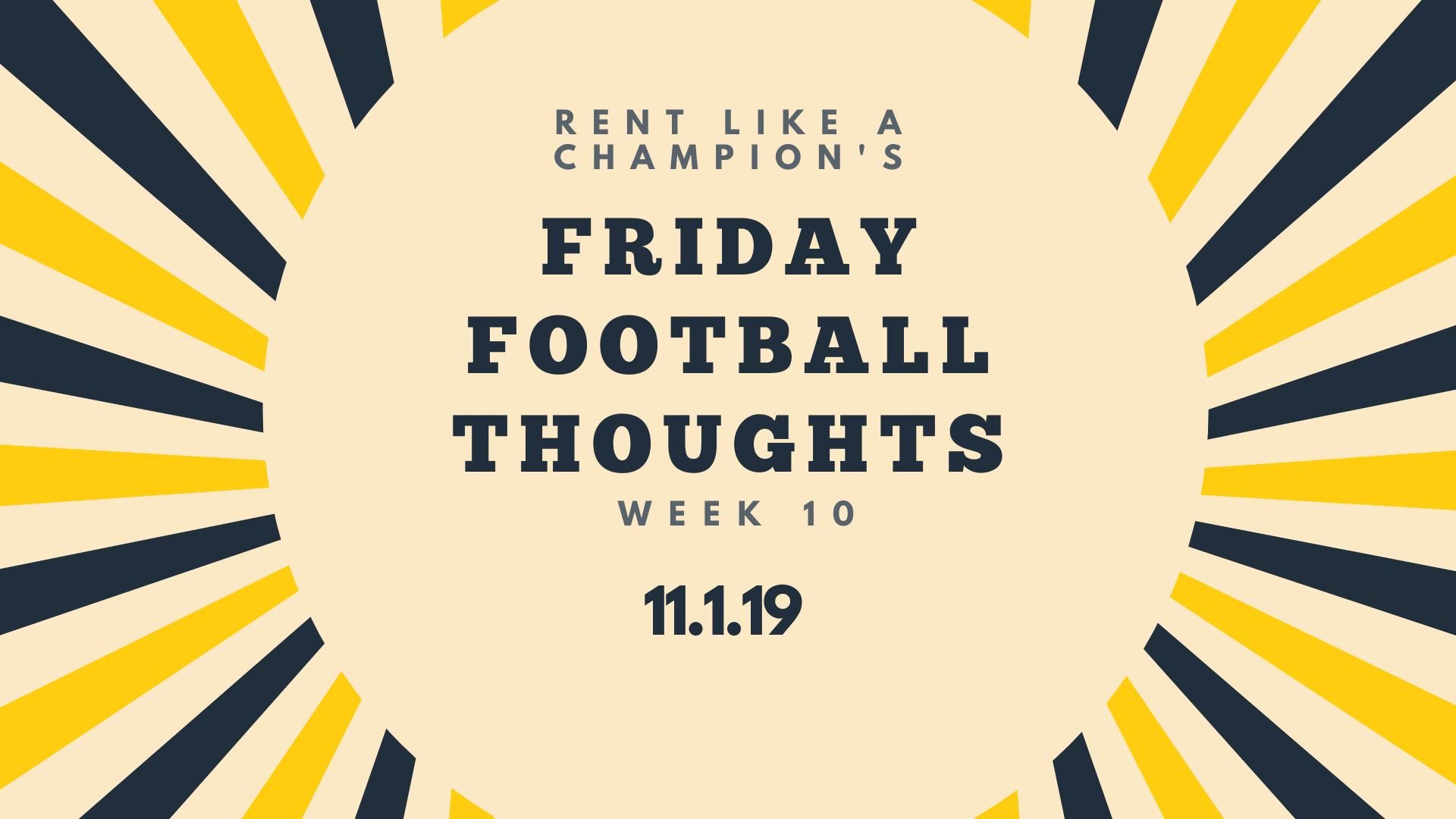 The next two weeks are going to be absolutely jam-packed, folks.

We’re just a week away from surprisingly-undefeated B1G teams Penn State and Minnesota squaring off, two other B1G teams trying to keep their season alive in Iowa and Wisconsin… and, of course, Alabama vs. LSU in Tuscaloosa.

But let’s not be too quick to overlook this weekend’s slate, because there will be action happening from coast to coast tomorrow, including these games we’re most looking forward to...

The Rivalry Game to Decide the SEC East:
(6) Florida vs. (8) Georgia

This game is guaranteed to be all defense and no offense. That’s the state of the SEC East right now, even as the West has rediscovered what high-powered offenses can do. The over/under for this game is 44.5, which is ridiculously low for a top-10 matchup, but here we are. Georgia quarterback Jake Fromm has been anointed the title of “game manager” and Florida quarterback Kyle Trask is still getting used to starting under center after not starting in high school or in his first three-plus years in college.

That’s enough about the offense, so let’s move on to the real stars of the World’s Largest Outdoor Cocktail Party: the defenses. Georgia allows just under 267 yards per game, good for seventh-best in the country. The Bulldogs also have the nation’s best red zone defense, allowing opponents to score just three touchdowns and three field goals in 11 red zone attempts. On the other sideline, Florida’s pass defense remains one of the nation’s best, as the Gators have nabbed 12 interceptions in eight games this season, the third-best mark in the country. Florida is right behind the Bulldogs with the third-best red zone defense in the FBS.

I cannot believe that Georgia is favored by nearly a touchdown in this game. Georgia’s win over Notre Dame is losing its luster, while Florida boasts a win over Auburn (as ugly as it looked). Crazy things always happen in this game, and often, the team that’s widely considered to be “better” than the other loses. That’s why I’m taking Florida 23-20.

Both of these teams have absolutely rolled through their schedule this year, and the only blemish is Memphis’ two-point loss to Temple three weeks ago. Both have beaten Power Five teams as well, with SMU toppling rival TCU and Memphis opening the season with a win over Ole Miss. The winner of this game will be the favorite to win the AAC and earn a spot in the Cotton Bowl as the Group of Five representative in a New Year’s Six bowl.

SMU is led by quarterback Shane Buchele, who transferred from Texas prior to the season. Buchele and other transfers have brought the Pony Express back to SMU for the first time in forever. The Mustangs average over 504 yards of offense per game, and are very balanced with about 301 yards per game coming through the air and 203 yards coming on the ground. SMU also scores 43 points per game.

Memphis allows just 23 points per game, and the Tigers’ defense has held good teams like Tulane and Navy to at or below that 23-point average. But, the defense has been shaky lately, and the Tigers relied on a late field goal miss by Tulsa to beat the Golden Hurricane by a point last week.

I think this game is all about momentum, and I’m riding the Pony Express. SMU wins this one 38-27.

Upset Pick of the Week
(7)Oregon at USC

Yes, Justin Herbert is great. Yes, CJ Verdell’s 257 yard game against Washington State had me shook. Yes, their defense has been solid week to week, and ranking 16th in the SP+ is nothing to sneeze at. And YES… mere weeks ago I had them in my “teams you should be paying attention to” list. I admit it. You caught me.

But consider this… in the last two weeks, they’ve won by the skin of their teeth - with a total margin of victory of just six. Add to that their win over California (72nd in the SP+) coming by just 10 points a mere four weeks ago, and you get the feeling this is a team living dangerously on the edge right now.

On the other side, you’ve got USC, who - behind a fast improving QB in Kedon Slovis (893 yards, eight touchdowns, and just one interception in his last three games), is starting to find a little bit of a rhythm in the Pac-12 South. And of course, USC has yet to lose at home in 2019… so why should they start on Saturday?

There’s still time to get your group into the game this season!

We still have more than 4,000 weekend home rentals across the country for college football’s top games in November! Click below to find your perfect place to stay now...

Stock Up, Stock Down: Who's hot and who's not as college football enters week 10
Notre Dame vs. Virginia Tech: Preview, keys to the game, and predictions