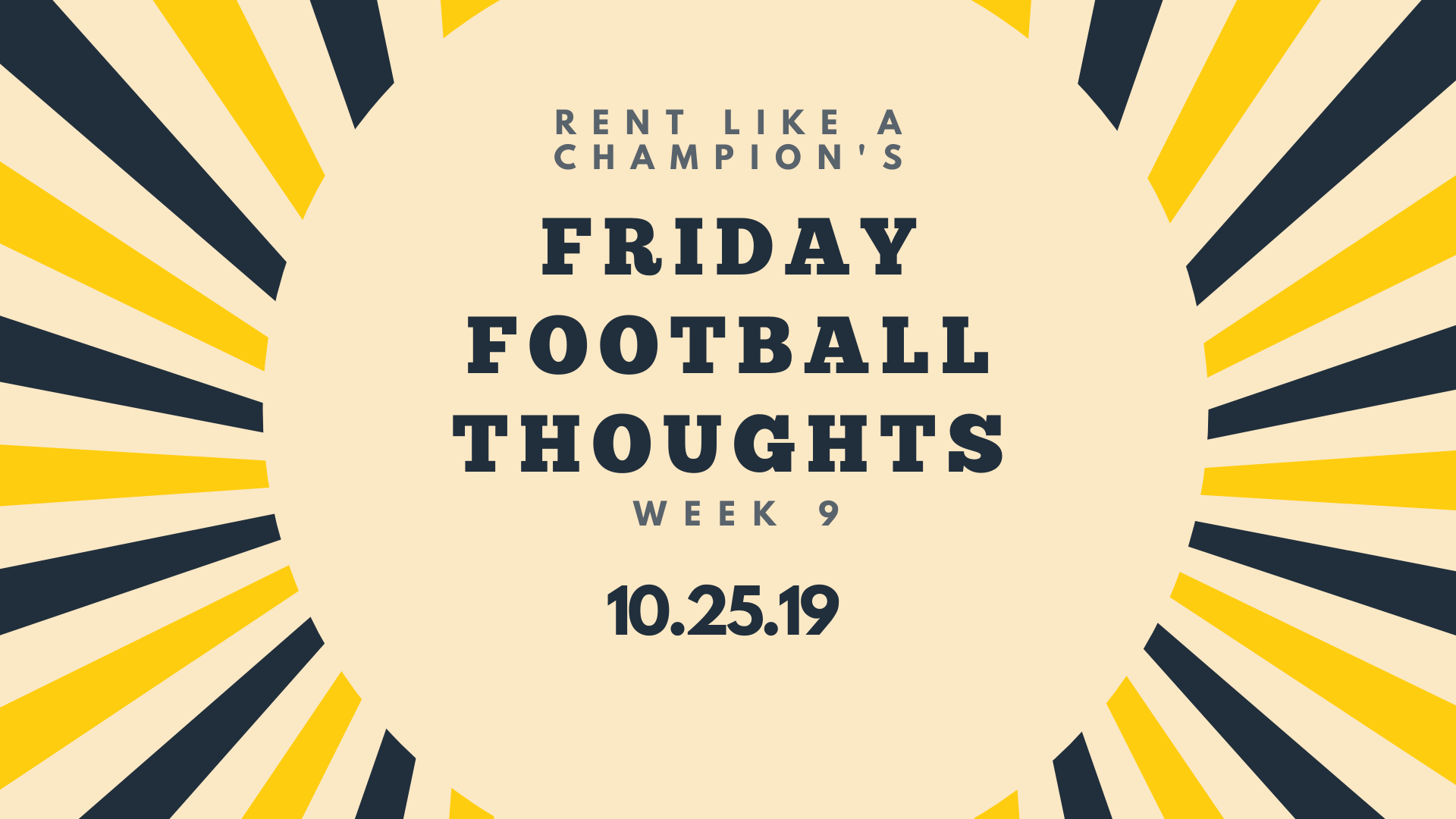 Well, we’ve already reached the final weekend of October games, and suddenly, our biggest match-ups moving forward are no longer just about “figuring out who’s for real” or “finding our true contenders.” Instead, these are finally the games where every moment could be the difference between a conference championship game bid, a New Years’ Day Bowl, a College Football Playoff bid… and the sudden end of the line for the teams left standing.

It’s that time of year, folks. We’re playing for keeps.

So, which games will we be watching this weekend? Our Betsy Goodfriend shares her picks...

The Top-10 Matchup Everyone is Talking About:
(9)Auburn at (2)LSU

LSU will be playing in its third top-10 matchup of the year after beating Texas and Florida earlier this season. The Tigers feature Heisman Trophy frontrunner Joe Burrow at quarterback. Burrow has thrown for 29 touchdowns in seven games this year, and the mark is already an LSU single-season record. LSU leans much less on the power run game than the Tigers have in recent years, but running back Clyde Edwards-Helaire has still managed 547 yards and seven touchdowns on the ground.

Auburn has faced its fair share of ranked of ranked teams in Oregon, Texas A&M and Florida, but Auburn has not faced a team of LSU’s caliber yet. Auburn lost to Florida by nine points on the road, and freshman quarterback Bo Nix definitely looked like a freshman with three interceptions in the game. Auburn will be without starting running back JaTarvious Whitlow, who is still recovering from knee surgery a few weeks ago.

There’s really no need to talk much about either defense in what should be an offensive shootout, but Auburn has the slight edge on defense with its NFL-ready defensive line. But, LSU’s offense is just too explosive not to roll with the Bayou Bengals at home. I have LSU winning 52-34.

Look, I’m not saying I think Wisconsin will beat Ohio State. In fact, I’m still betting on the Buckeyes to win this game. But, this game is set up too perfectly for an upset not to at least put Ohio State on upset alert.

Picture this: a team with national championship aspirations and one of the nation’s best defenses loses a heartbreaker to Illinois in perhaps the most shocking upset of the season. What does that team do to bounce back the next week but knock off one of the best teams in the country on the road? See, it’s just how the story is written for Wisconsin.

Wisconsin needs to be able to feed running back Jonathan Taylor early and often. The junior already has 957 rushing yards, and he averages 6.1 yards per carry. If the Badgers can use him to create slow, methodical drives, they can limit the number of possessions for quarterback Justin Fields and the Buckeye offense.

Speaking of the Buckeyes, their offense averages 49.7 points per game, good for third in the country. Wisconsin will be by far the best defense they have faced up to this point in the season, but the way the offense has been clicking, that may not be much of an issue for the Buckeyes. I’ll take the Buckeyes straight up, but I think this game will be closer than people expect. Ohio State escapes with a 34-28 win.

Group of Five Game of the Week:
Tulane at Navy

I absolutely love this Tulane team. With two losses, the Green Wave are unlikely to snag the Group of Five playoff spot, but I think they are one of the most underrated teams in the country. Head coach Willie Fritz has done a tremendous job turning around a Tulane team that went 3-9 the year before he was hired.

Navy is always a tough team to play with its triple option offense, and it has been business as usual for the Midshipmen, who have gone 5-1 in the first half of the season. As expected in a triple option system, Navy’s rushing offense is the best in the country, averaging 345 rushing yards per game. Navy’s defense has also been a strength of this team, as the unit is only giving up 16.2 points per game.

Both teams have lost to Memphis on the road, so this game is crucial to each squad’s AAC Championship hopes. It’s always tough to pick against Navy, but I think Tulane makes a statement to the rest of the AAC in this game that they are a legitimate contender to make the conference championship game. I’ve got Tulane 31-28 in a game you won’t want to miss.

Still planning a trip this season? We've got you covered!

We've still got over 4,000 weekend home rentals across the country available for college football's biggest games this season! Click below to get your team in the game now...

Week 8 Recap: Our College Football Power Rankings Are Here...
Notre Dame at Michigan: Preview, keys to the game, and predictions!