Clemson vs. Virginia: Your ACC Championship preview, keys to the game, and predictions! 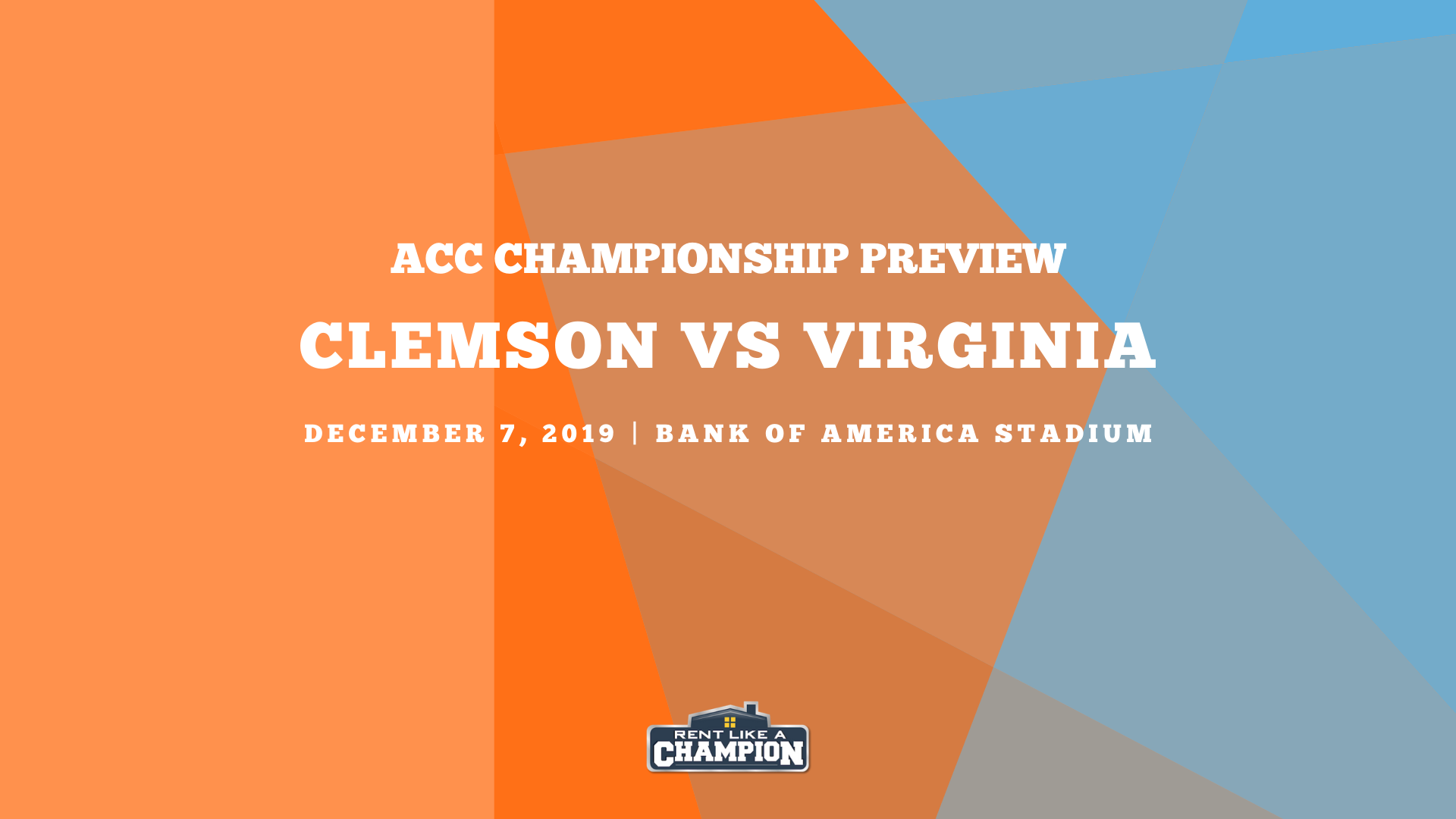 Well, here we are, fans. A 12-0 record, regular season dominance, and three months with which to (successfully) turn Clemson into a seemingly unstoppable powerhouse. Now, the Tigers will enter the ACC Championship game for the fifth year looking for their fifth straight championship.

And, of course, by extension, a final win in Charlotte puts the final touch on Clemson’s resume for the College Football Playoff…

So, can they get it done? By now, you know the drill: let’s get into it…

ABOUT THE VIRGINIA CAVALIERS

There will be a lot of narratives surrounding this game: Clemson’s stranglehold on the ACC, Bryce Perkins, the CFP, etc. But one storyline that shouldn’t get lost in the shuffle is the extent to which head coach Bronco Mendenhall has turned this Virginia Cavaliers football team around.

Consider this: before Mendenhall took the job in 2016, Virginia had recorded just two winning seasons in the previous decade, and hadn’t finished a season with double digit wins since 1989.

In each year of his tenure, Mendenhall has incrementally improved the Hoos - culminating in this year’s ACC Championship game berth, the first in program history.

Whether they’ll be able to stop Clemson - who will come into this game as a four touchdown favorite - is a different conversion entirely. But regardless of the result of tomorrow’s match-up, one thing is for certain: Virginia seems to have found a winner in Mendenhall.

Virginia’s offense begins and ends with one name: Bryce Perkins.

It’s easy for Clemson fans to see the mediocrity throughout the ACC and simply wave away the threat of individual talent - especially with names like Lawrence, Etienne, Ross, and Higgins lining up for the Tigers offensively. But make no mistake: Perkins is on that level - and there is little doubt that outside of Death Valley, he is the conference’s most dynamic playmaker.

For a snapshot of just how good Perkins has been over the past two years for the Cavaliers, consider this passage from Shakin’ the Southland’s conversation with Virginia writer, Paul Wiley:

Everything on this offense is centered around Perkins. Everything. He has nearly 3,000 yards passing, but he’s also far and away leading the team in rushing yards and attempts on the year. Even when they’re not giving the ball to Perkins, often they’re setting up to use his impact as a decoy to get the ball on the outside away from spies watching for him to leave the pocket. As far as I’ve seen there’s no stat that indicates “usage rate” in football - but if there were, my guess is Perkins would be high amongst the league leaders in 2019.

Overall, Perkins has done a pretty good job of spreading the ball around, but his favorite receiving targets are Joe Reed, Terrell Jana, and Hasise Dubois - while senior TE Tanner Crowley has been getting some solid looks, as well. His offensive line has struggled a bit to protect him, something that was particularly an issue when the Cavaliers went to play Notre Dame early this season, as they allowed a whopping eight sacks to the Irish. Overall, they’re 103rd in sack rate allowed on the year, so my guess is that’s where Clemson’s defensive focus will start from.

Defensively, the Cavaliers are much more balanced than their offensive counterparts - but it all starts with their pass rush. Mendenhall’s system focuses on an extremely aggressive defense that prominently features their linebackers, the talented quartet of Noah Taylor, Zane Zandier, Charles Snowden, and Jordan Mack. Together, they’ve combined for 40 tackles for a loss, and are the bedrock of a defense that ranks fifth in sack rate in 2019.

And while they lost top DB Bryce Hall early in the season, the secondary has still done its part - getting a solid 11 interceptions and 51 passes defended this year, and holding their opponents to just 54.5% completions on the year.

Their rushing defense isn’t quite as strong as their passing, but they’re certainly nothing to sneeze at: they’re allowing 123.25 yards per game and 3.48 yards per carry as a team (26th and 23rd in the country, respectively) - though their aggressiveness isn’t quite as effective when stopping ground attacks. They’re 35th in stuff rate, but are 62nd in opportunity rate, and have given up a middle-of-the-road 16 rushing touchdowns this year.

South Carolina was the statistically strongest defense Clemson had faced up to last week, but I think Virginia is an even further step up, if only because of how aggressively they’ll try to disrupt things for opposing offenses. They’re 16th in broken drives (drives in which they allow zero or negative yards), and are allowing first downs at a rate that ranks 14th in the country. Their aggressiveness, however, does leave them a little susceptible to big plays. If Clemson’s offensive line can protect Lawrence, look for this offense to take advantage by going deep.

Make Perkins hold onto the football in the pocket

Plain and simple: Perkins is the entire strategy for Virginia coming into this one- so he goes, so the Hoos will go.

In the first half of their game against the Irish, the Perkins’ heavy strategy worked, as he found his receivers quickly before the pass rush could get to him. But the Irish adjusted to disallow those passes from Perkins, and in the second half… well… those sacks mounted up, and ultimately it gave Notre Dame’s offense the opportunity to pull back ahead for the victory.

If Clemson wants to stop him, they’ll need to cover the quick routes Virginia will try to use to win the possession game and move down the field. If they make Perkins hold onto the football, they’ll be able to take advantage of Virginia’s inability to protect the QB - and will stop the Cavaliers offense before it can even start.

Ultimately, we shouldn’t overlook what Virginia has done coming into this game- but this is Clemson’s ballgame.

The Tigers have the size and speed defensively to hang with Bryce Perkins (and everyone else on Virginia’s offense, for that matter), and the Cavaliers’ propensity for giving up the big play is bad news against a team with the kind of weapons Clemson has on offense.

I think a 28.5 point spread feels a bit high, but it will be a dominant performance nonetheless for Dabo Swinney’s team, who will roll into the CFP once again this weekend.