The Curious Clemson Case: Why the 9-0 Tigers still face doubters in the final weeks 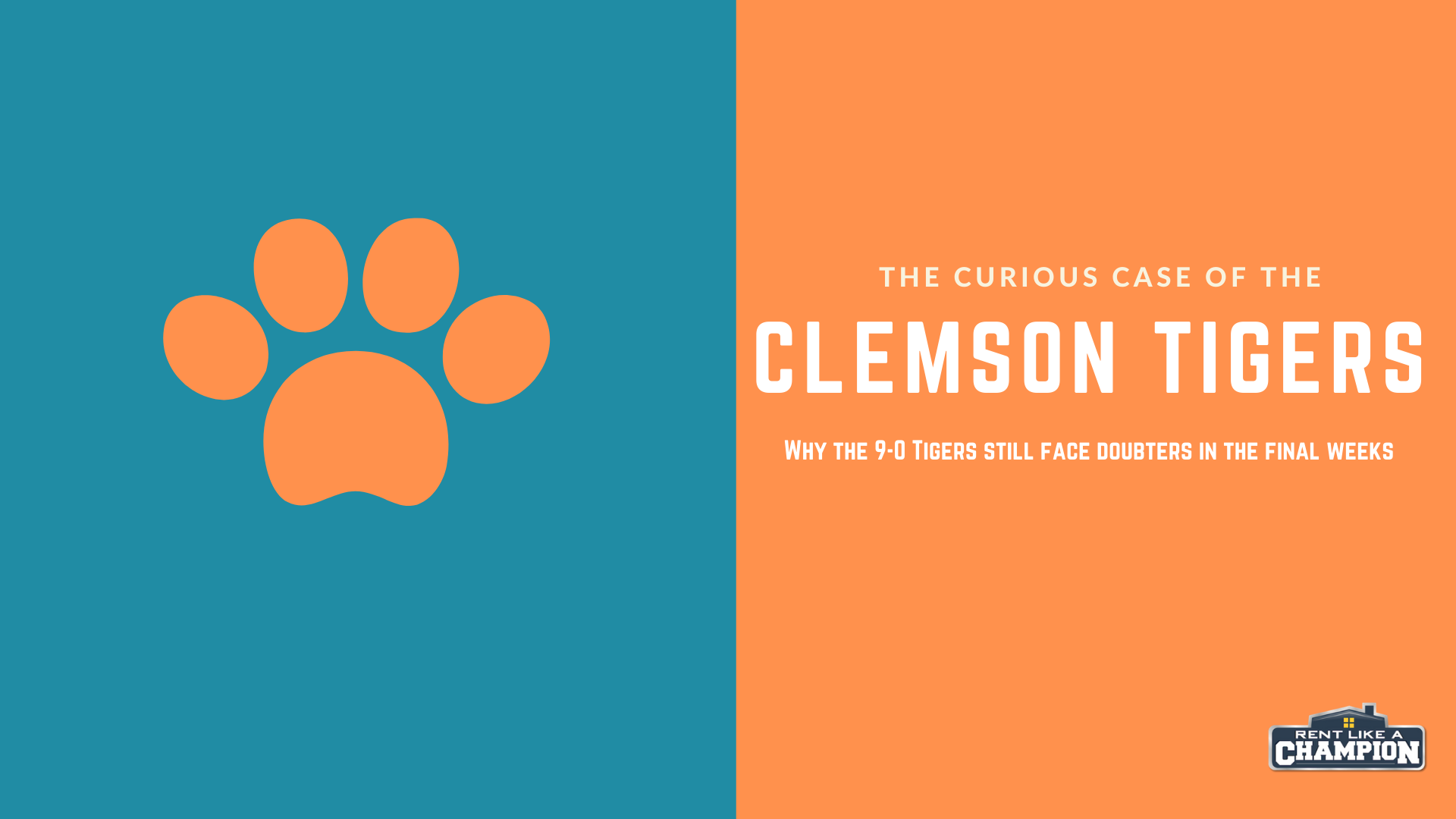 Clemson dispatched of Wofford this weekend 59-14, in a game that, unsurprisingly, barely even felt that close. Now, it’s not really worth breaking down a 45-point win over an FCS opponent, because… well… it went fine.

They shut out the Terriers until the midway point of the third quarter, and ended the day with a season-high 702 yards offensively, while holding Wofford’s potent rushing attack to just 139 yards and 3.1 yards per carry on the day. Clemson’s offense also recorded their second-straight game without a turnover, and the defense’s ninth straight game holding an opponent under 300 yards - and once again, Dabo Swinney’s team continues to hit their stride at just the right time with the postseason just around the corner.

But from the lack of marquee match-ups for the Clemson Tigers, to simply some lingering concerns rooted earlier in the season… the conversation continues to circle about where Clemson should be placed in the pecking order of the rest of the country. Despite going 9-0 thus far in 2019, they’ve dipped from 1st in the AP poll to start the season to now 4th… which would seem to indicate, curiously, that the defending champions would be on the cusp of missing out on the College Football Playoff, were it to be decided today.

Why Clemson is being so scrutinized

Part of this criticism, of course, is due to just how bad the ACC ended up being in 2019. While coming into the season many knew it would be a down year for the conference… few expected this.

Clemson is the only ACC team ranked in the top 25 of SP+ rankings - 5th as of this week - and one of only two in the top 40. Miami is the other at 28th… however, in a cruel twist for Clemson, the ‘Canes are one of the few ACC teams they won’t get a crack at this season. And as for the rest of their schedule, with the benefit of being able to see where their opponents have landed with just a few weeks left in the season, they’ve dropped from 48th in strength of schedule to 81st.

The good news (or bad news, depending on your point of view, I suppose), is that Clemson will actually face a few tough tests that could turn heads to close out the season. While a trip to NC State this weekend will likely look quite similar to the dominant performances that have come to define their 2019, their game against 7-1 Wake Forest (currently ranked 22nd in the AP poll) the following week actually presents an interesting situation: if Wake Forest upsets Clemson, the Tigers wouldn’t just likely drop of out the CFP conversation - they’d stand to lose the ACC Atlantic division if Wake Forest won out.

Beat the Demon Deacons, of course, and they’ll still need to hit the road in their final week for what I believe to be their toughest overall game of the season: The Palmetto Bowl against South Carolina. True, the Gamecocks are just 4-5 this season, but they’ve already taken down Georgia at home, and despite their record, they’re still 38th in the SP+.

But perhaps the more interesting question is what happens if Clemson does win out. That 81st ranked strength of schedule is troubling, after all, as the undefeated 2018 UCF Knights team - who were kept out primarily because of a lacking schedule - ranked 85th by season’s end.

Take that for what you will, of course. While I would have a hard time believing the committee would keep out an undefeated Power Five team should Clemson close their season out - teams like Georgia, Penn State, and Oregon all have multiple wins better than the ones Clemson can tout at this state, and are simply waiting to pounce into the top four should the Tigers stumble even a bit in their final few weeks.

Why scrutinizing Clemson is more than a little ridiculous

Now, you can criticize the strength of Clemson’s schedule, but you can’t make the argument about how easy Clemson’s road has appeared without acknowledging that the Tigers have been making it look easy all season long.

Their average margin of victory is 32.5 points, and save for one scare in Chapel Hill against the Tar Heels in September, none of their games have been won by less than two touchdowns. Not only are they still 5th in the SP+ (7th in offense, and 5th in defense), they’re 3rd in the Football Power Index, 3rd in the FEI rankings - but if old fashioned counting stats are more your bag, then allow me to direct your attention to their 545.5 yards per game on offense (3rd), and 247.2 ypg on defense (4th).

Meanwhile, the individual performances have been, in a word, unbelievable. Trevor Lawrence, despite some struggles with his decision making, still ranks 11th in QB rating at 164.12 - along with a receiving core that is among the best in the country. Amari Rogers, Justyn Ross, and Tee Higgins have a combined 90 receptions for 1,471 yards and 13 TDs this season - and somehow, watching them, you feel like even that’s understating their game-breaking impact. Add all this to the career season RB Travis Etienne has been having (1,102 yards, 8.96 yards per carry, and 11 touchdowns), and you do have to wonder how anyone in the country will stop them this season.

Then there’s the defense, where Isaiah Simmons has stepped into the linebacker role better than any could have expected, posting a team-leading 12 tackles for a loss to go with six sacks and an interception this season. Meanwhile, in the secondary, Tanner Muse and his three interceptions this season have headlined a secondary that’s tied for 9th in interceptions, and are allowed just 134 yards through the air this season (2nd).

What to take away...

From a fan perspective, it can be exhausting to see your team go 9-0 only to hear that they haven’t “proven” anything yet this season. The Tigers have absolutely dominated week in and week out, they have some of the best individual contributors at nearly every position on the field, and… not for nothing… they’re freaking defending national champions after absolutely obliterating Alabama a year ago.

But if there’s a silver lining to all of this, it’s that the more the rest of the country hems and haws about Clemson… the more this team can keep a bit of an edge to them as the season goes on. This is the time of year where plenty of teams will start counting their chickens and looking ahead to conference championships, but Swinney and his squad knows that every week they’ll be tested not just by their opponents, but by the national onlookers who will be tearing apart even the most lopsided of wins from the Tigers from here on out. And they’ll be loud about it - after all, they already have been.

But as Clemson continues to look sharper with each passing week, one thing is clear: they’re listening. And they’re ready for the chance to respond.

Notre Dame braves the elements (and the Hokies' defense) to survive in South Bend
Notre Dame at Duke: Preview, keys to the game, and predictions