Clemson at South Carolina: Preview, keys to the game, and predictions 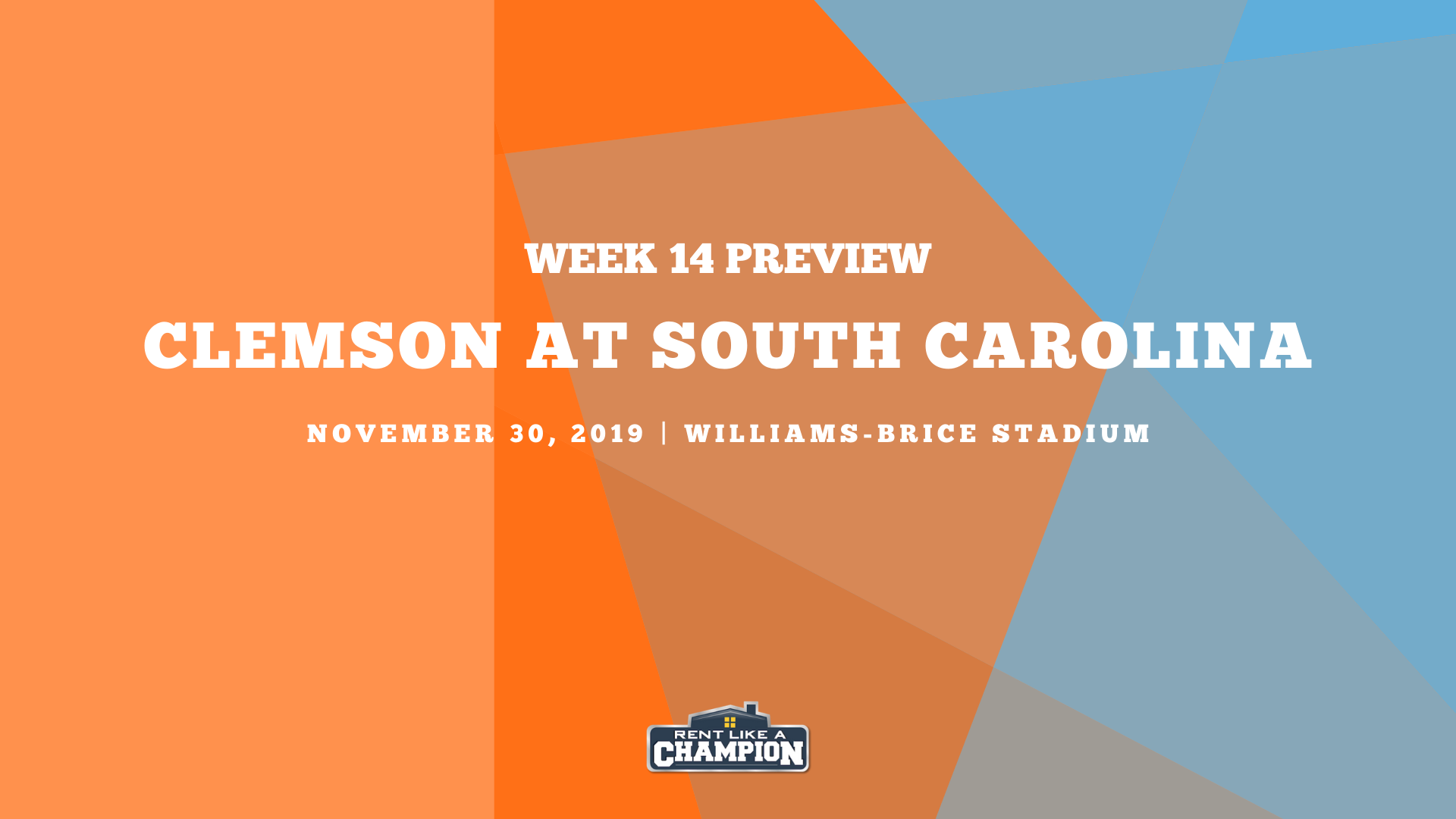 Happy Thanksgiving, everyone! I hope you had a wonderful day with your loved ones, and now that you’re full of turkey, stuffing and pie… you’ve saved some room for Clemson football, and the 2019 Palmetto Bowl against South Carolina.

It’s the 117th meeting between these two programs, and should the Tigers win it would be their sixth straight victory of the series.

ABOUT THE SOUTH CAROLINA GAMECOCKS

Over the past few years, South Carolina has always been on my list of “teams to watch.” When I first began writing about college football, Jake Bentley was a promising young QB who might take advantage of turnover in the SEC East, Deebo Samuel was among the best receivers in the country - and the defense had gone from “steadily improving” to a legitimately dominant unit under coach Will Muschamp.

But then there were injuries, and missed opportunities, and the offense stagnated, and then there were more injuries… and suddenly, at 4-7 as 2019 wraps up, Muschamp’s time in Columbia might start to have a clock on it.

This season has encapsulated so much of what South Carolina has been: a win against Georgia on the road featuring four forced turnovers by the defense… but losses to Appalachian State and Tennessee. Two solid running backs in Tavien Feaster and Rico Dowdle… if only they could stay healthy at the same time. And a team with a preseason projection to finish 18th in the SP+, now sitting at 43rd, about to miss their first bowl game since 2015.

But that also means from Clemson’s side, there has to be a respect for the talent that South Carolina will be bringing tomorrow. After all, for South Carolina, this will be the culmination of their 2019 season; their bowl game by default. And what better way to end their season, than by spoiling things for their in-state rivals?

After Jake Bentley went down early in the year with a foot injury, it fell on freshman Ryan Hilinski to take over. And while Bentley’s absence has been a huge reason for the Gamecocks’ struggles this season, Hilinski certainly hasn’t played badly considering this is his first year starting in the SEC. He’s amassed over 2,200 yards for 11 touchdowns and four interceptions on just under 60% passing in 11 games of action, for a QB rating of 115.4 on the season.

He’s certainly been hindered by Feaster and Dowdle struggling to stay on the field, as well as a receiving core that had to replace Deebo Samuels after last season and will be missing top receiver Bryan Edwards heading into this one. On the plus side, his offensive line has protected him reasonably well - landing 47th in sack rate - but they’ve yet to see anything like the pass rush Clemson will be bringing tomorrow, so without his top receiving option, Hilinski will need to find places to go with the football… fast.

And in terms of those who could replace Edwards, I expect South Carolina to spend a fair bit of time going to junior Shi Smith, who has 38 catches for 449 yards and two touchdowns thus far, as well as give some wildcat carries to Daekereon Joyner.

Overall, however, against Clemson’s top five defense… this could be a long day for the Gamecocks offensively.

Defensively, I actually expect South Carolina to give Clemson their toughest test yet this season.

They’re 27th in touchdown rate allowed, 43rd in first down rate allowed, and have been solid at eliminating big plays from their opposition. DT Javon Kinlaw is an absolute force in the interior - having amassed six sacks and four QB hurries this season, and who, at 6’6” 310 lbs, will be the most physically imposing player the Tigers have faced yet. He was particularly fantastic against Georgia this season, so look for him to be a factor in this one.

Otherwise, you’ll see a lot of press man coverage from Muschamp, as per usual, and with 12 interceptions and under 60% completions allowed this year, it’s a secondary that could give Trevor Lawrence and Clemson a real fight - but the defensive line has to do better than the middle-of-the-road sack rate and QB hurry numbers they’ve put up this season.

Oddly, however, I don’t think the passing attack is where Clemson will win this game. Which brings me to…

Even with solid personnel like Kinlaw along the defensive line… I’m skeptical of South Carolina’s run defense. They’re allowing over four yards per carry this season, are 72nd in line yards per carry, and a troubling 104th in stuff rate on the year. It tracks, then, that they’ve leaned heavily on linebackers Ernest Jones and TJ Brunson, who are first and second in tackles on the year.

And where the secondary showed some prowess against Jake Fromm and Georgia - picking Fromm off three times on the day - this interior has yet to be tested by a running back of Etienne’s caliber (then again, there are very few backs of Etienne’s caliber).

Playing on the road, then, against an aggressive secondary in a highly-emotional rivalry game, I would expect Clemson to slow the game down by handing it off to Etienne early and often. Etienne, of course, is on a tear - having amassed 100+ yards in each of his last six games, and running at nearly nine yards per carry on the year.

Give it to Travis Etienne from the get go, force the secondary to help out as he reaches the second level of the defense, then let Lawrence burn them deep to put the game away.

While I think that the emotions of this rivalry match-up will have South Carolina’s juices flowing at home to start, Clemson just has too much for this to stay close for long.

Expect a low-scoring game through the first two quarters, as the Gamecocks’ defense bends but doesn’t break, and finds ways to get some turnovers early on to make up for their offense stalling against the Tigers defense.

But eventually, the dam will break, and a tired South Carolina defense won’t be able to hold off Clemson’s attack any longer. By the end of the game, the scoreboard won’t reflect how close this one felt early on - but it will be a dominant Clemson performance all the same.

From all of us here at Rent Like A Champion, we hope you have a safe and wonderful holiday with friends, family, and loved ones. Thanks for being a member of our team, and Happy Thanksgiving!