Clemson vs. Boston College: Preview, keys to the game, and predictions 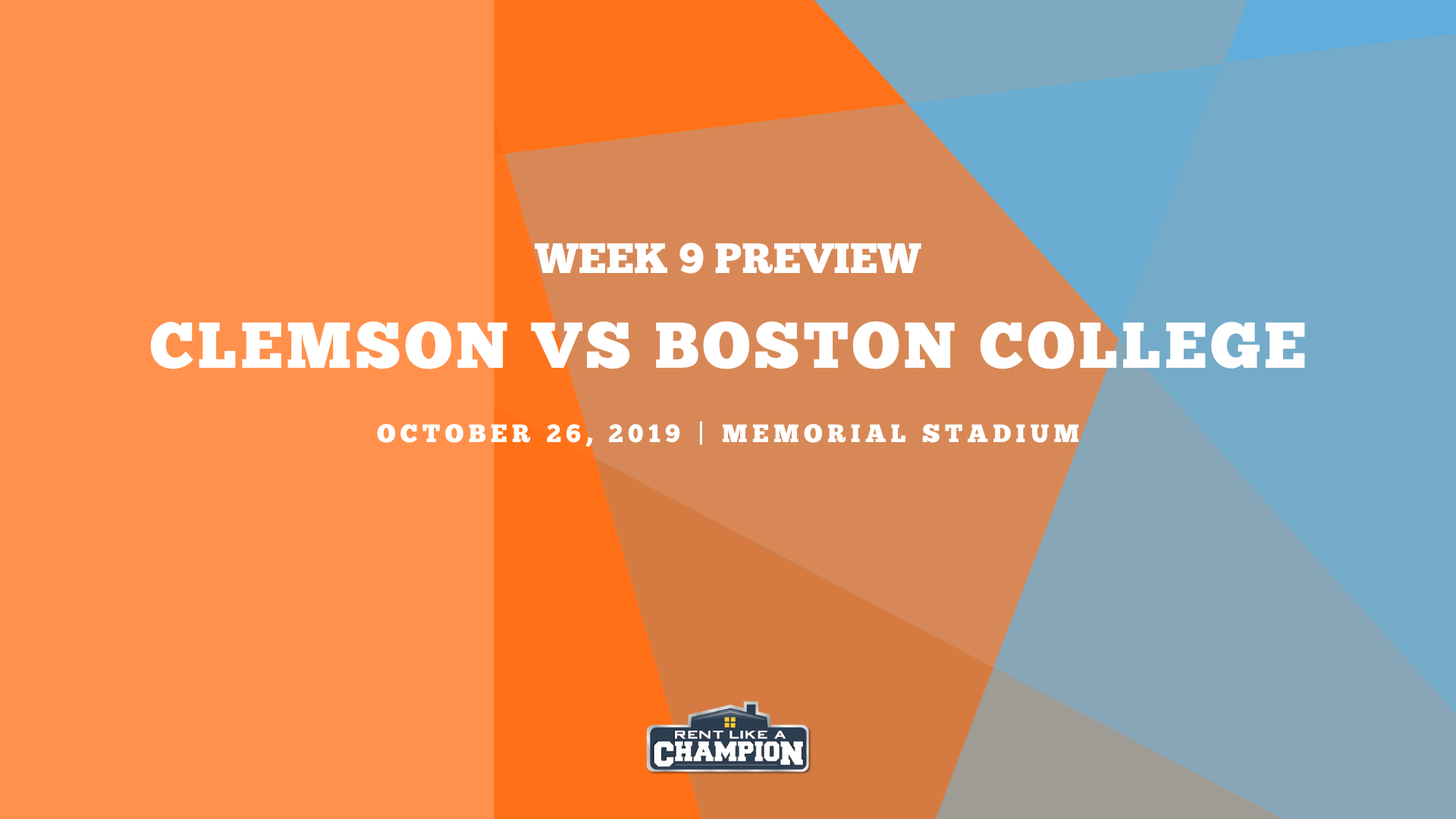 We’re just a few weeks away from the very first College Football Playoff ranking getting released, and at the moment, Clemson is among the more curious cases in the country. On the one hand, at 7-0, the defending champions have done all that’s been asked of them, and are statistically nearly unequaled by all but the very best in the country.

But on the other, the ACC’s down season generally has provided them with little competition - save for a scare in Chapel Hill - and there have been more than a few rumblings about every unconvincing win or every mistake leading the national media to wonder, “Is Clemson still a title favorite?”

The answer, of course, is yes. Of course they are. Even though I put them 6th in my most recent power rankings, few can (and fewer should) deny that the Tigers have as talented a roster as any in the country. They will, almost certainly, be back in the College Football Playoff come 2020.

But Clemson themselves can’t listen to these rumblings - nor can they look past the schedule they still have to play in front of them. Because for as much as I’m sure Clemson can’t wait to get their hands on the likes of Ohio State, Oklahoma, LSU, and Alabama… the rest of the ACC knows that a win over Clemson can make their season.

And this week, it will be Boston College’s turn to try and crash the party...

You know, for a moment there… it looked as though Boston College was on the cusp of something big.

Each of the past few years, head coach Steve Addazio has rolled out a team that, on paper at least, looks primed and ready to challenge the top brass of the ACC… and each of the past few years, disappointing losses, unmatched potential, and just plain bad luck has kept them at seven wins since what seems like 2009 (that’s barely an exaggeration - since 2009 all but three of their seasons have ended with seven wins, and the other three all finished below that).

This year, well… it looks like more of the same. The Eagles come into this one 4-3, and have, you guessed, three more winnable games on their schedule from now until the end of the year - Syracuse, Florida State, and Pitt.

Obviously, however, no one is pencilling in a BC victory in Death Valley this weekend - as getting back to seven wins this season will be less business as usual for Addazio’s squad, and more a roll with the punches kind of season.

They lost tons of personnel on the defensive side - long their bread and butter - and a season-ending injury to QB Anthony Brown has made the offense all-but-completely one-dimensional.

Let’s get into those specifics…

The injury to Brown shouldn’t be minimized whatsoever, because he was in the midst of a putting together a pretty solid season. True, the numbers weren’t jaw-dropping - but at nearly a 60% completion rate, 1,250 yards and nine touchdowns (to only two interceptions), he was doing just enough to make defenses respect Boston College’s ability to pass the ball. The same, unfortunately, cannot be said thus far for his replacement, sophomore Dennis Gospel.

Against a not great NC State defense, Gospel was only able to complete six passes on 15 attempts. I’m guessing against one of the country’s statistically best defenses, Boston College will… um… well I bet they’ll focus on the run.

And therein lies the good for the Eagles: their rushing attack is, objectively, fantastic. We all know about AJ Dillon by now, but the other story in the backfield has been the emergence of sophomore David Bailey, who is averaging 6.2 yards per carry on 81 attempts thus far this season. All told, Boston College ranks 6th in rushing yards per game behind one of the country’s absolute best offensive lines, who rank 27th in line yards, 22nd in opportunity rate, and 1st in sack rate allowed.

The biggest difference between this year’s Boston College team and the Eagles teams of the past few years has been, inarguably, the defense - which lost tons of key contributors coming into this year. This included their top tackler, LB Connor Strachan, along with three of their top four tacklers along the defensive line.

Add to that the loss of DBs coach Anthony Campanile, and it’s clear why the Eagles have gone from ranking 32nd in the defensive SP+ a year ago to just 94th in 2019.

You’ll see BC try to bring some extra players to create havoc in the backfield, but if they’re unable to get past Clemson’s offensive line, the secondary currently allowing over 288 yards per game through the air could be in trouble against Trevor Lawrence and this Clemson offense.

Don’t do the Eagles’ work for them

It sounds simple, but Clemson has to do the little things tomorrow against Boston College - and can’t allow the silly mistakes we saw in the Louisville game to make this any closer than it should be.

A turnover-free game from Trevor Lawrence would go a long way in showing that the sophomore is sharpening up as the postseason approaches - which will certainly mean something to the College Football Playoff committee releasing their first votes in just a few weeks.

Even if Clemson comes out flat (which I don’t think they will), there’s just not enough talent on Boston College’s sideline to pull this one off on the road. The only question for me is whether Clemson covers the ridiculous spread on this game currently - and while I think it’s close, I’ll take Clemson by more than 35 points in this game.

There’s still time to get your group to Clemson!

We’ve still got weekend home rentals in Clemson available for your group for the 2019 season and beyond! Click below to search all of our options now, and find your perfect game day getaway...

Auburn at LSU: Preview, keys to the game, and predictions
Rained out in Ann Arbor: Notre Dame falls hard to Michigan