Clemson finishes another undefeated ACC regular season. Let's see how they got there... 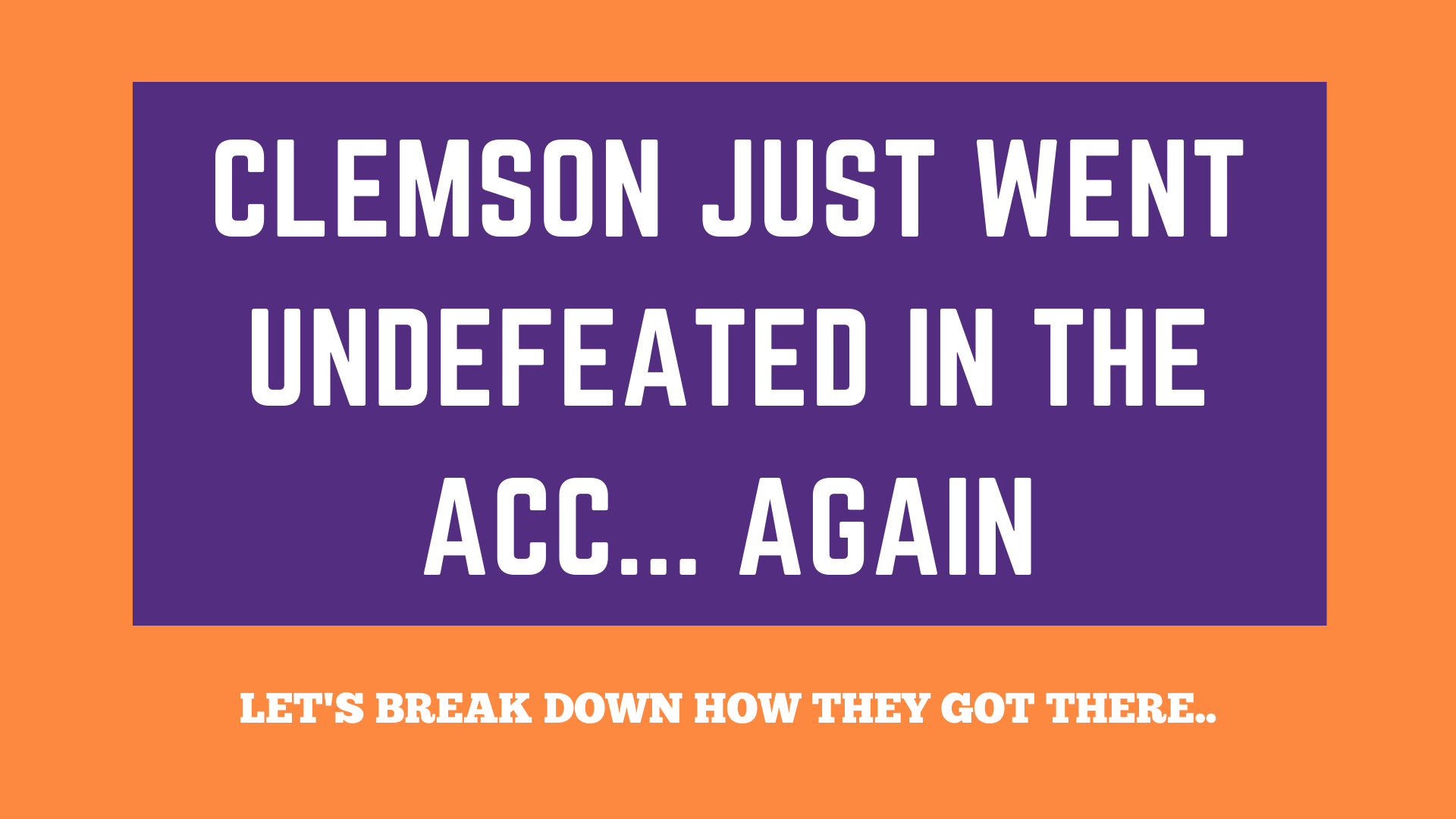 With their absolutely dominant 52-3 win over the Wake Forest Demon Deacons this past weekend, Clemson wrapped up their ACC regular season with another undefeated conference record. The last time they lost a conference game was October 13, 2017 against Syracuse, and since then, they’ve rattled off 20 straight conference victories.

Now, they’ll get a week off before a match-up in Columbia awaits them, as they close the regular season by taking on the South Carolina Gamecocks in the 117th Palmetto Bowl.

But before we break for the bye week, let’s take a look back at another Atlantic divisional title and break down some key observations as the ACC season wraps up...

Despite the drop in the ratings, Clemson stayed remarkably consistent

Remember when Clemson started the year #1? And how everyone (including me) wondered how anyone would stand in their way to a back-to-back title, let alone stop them on their way through the ACC to get there?

Somewhere along the way this season, amidst their 35.2 point average margin of victory, their 543.1 yards per game (3rd nationally), and all-but-one game won by at least two touchdowns - it all began to get lost in a blur for those not watching Clemson week-to-week.

But for those that did, you’ll see just how consistently they played week in, and week out this season - especially on the defensive side of the ball. They’ve yet to allow a single opponent to cross the 300 yard mark in a game, held opponents to under 150 yards rushing eight times, including four games in which they held opponents under 100.

And of course, this past weekend against Wake Forest - considered to be one of the best offenses in the ACC - they held the Demon Deacons to just 105 yards, including 41 total passing yards. That's a remarkable feat against an offense that was averaging nearly 300 yards passing per game coming in.

Offensively, there were some legitimate concerns about turnovers early on in the year - through their first six games, Clemson had recorded 11. But you also can’t talk about those turnovers in the first half of the season without telling the rest of the story - in their next five games of the season, they gave up just three turnovers. Meanwhile, to only focus on the turnovers would be to miss a team that ends conference play 6th in the FEI and SP+ - both roughly on par with where they ended the year last year.

And in conference play, specifically, they’ve been tremendous - going for more than 600 yards offensively three times, and dropping below 549 yards just once against North Carolina. Meanwhile, the defense allowed more than 14 points only once in the ACC (once again, versus UNC).

While Clemson on the whole played consistently throughout the year, the offense - and in particular Trevor Lawrence - really hit another gear midway through the season.

Mind you, he wasn’t playing badly through the first six games of the year - he averaged 216.8 yards on 62.7% passing, with an average QB rating of 155.36. But those turnover problems we talked about were often synonymous with his performance, and with good reason: he threw six turnovers through those first six games, and fumbled three times.

But as Lawrence went, so did the Tigers, and over the last five games Lawrence has been nothing short of inspired. His numbers ballooned to 254.8 yards per game on 75.4% passing for an average QB rating of 214.6. For context on that last number, the current season leader in that category for the entire season in Jalen Hurts at 209.1 (when the whole season is taken into account, Lawrence has worked his way up 171.8, good for 8th in the country).

Most critically, in the last five games he’s only committed two interceptions - both against Louisville on October 26 - and has appeared much sharper as the regular season wraps to a close and the Tigers turn their attention to the postseason.

And when split out to only his performances against conference opponents, Lawrence has noticeably improved on his already stellar freshman year performance:

With Lawrence’s improvement came improvement the rest of the offense - in particular Travis Etienne, who, after starting the year averaging 98.2 yards per game, has exploded in the last five to average 149.2 yards (10.8 yards per carry), and has notched nine of his 14 total touchdowns on the year.

While Clemson got better, the ACC got worse…

Unfortunately for Clemson, while they continued to improve throughout the year, the perception of their conference (and with it the perception of Clemson’s schedule) only got worse - and it wasn’t entirely unfounded.

The ACC has the fewest number of teams ranked in the top 25 of the SP+, as only Miami lands at 25th - and not only did Clemson not draw a game against them this season, they also didn’t draw the next two teams in the standings, Virginia (39th) and Virginia Tech (44th). In the ACC, only Clemson will end the regular season with 10+ wins, and it’s possible that no other team in the conference even reaches nine (unlikely, but possible).

Finally, on the whole, ACC teams are 3-6 vs. the rest of the country, the worst inter-conference winning percentage amongst any of the Power Five this season. That’s landed Clemson’s strength of schedule at 83rd in the country by season’s end according to Sports Reference, while the FEI has their opponent adjusted rankings landing at 87th.

What to make of Clemson as the ACC schedule wraps up

I’m sure even Clemson fans wish that the ACC were even just a bit better in 2019 - if only to show just how good the Tigers are. And make no mistake, they are great, no matter who they’re playing.

They’ll have two more games to really showcase themselves on a larger stage - first against a Gamecocks team that boasts a road win against Georgia, then a conference championship game against whichever team emerges from the chaos that is the Coastal Division.

The Tigers have walked a fine line this season: a single loss, and they’re all-but-eliminated as a one-loss team in the CFP field. That remains the case even in these last few weeks.

But even those who nay-sayed Clemson this season haven’t been able to ignore how much they’ve improved. And that Clemson has improved is due in no small part, I’m sure, to just how many naysayers they’ve had to listen to.

Now, at 11-0, Clemson has done everything asked of them - and they’ve done it as dominantly as any team in the country. They’ve earned a week off, and I expect them to come out ready to make an even louder statement in the Palmetto Bowl.

My three favorite things from Notre Dame's win over Navy
Penn State at Ohio State: Preview, keys to the game, and predictions 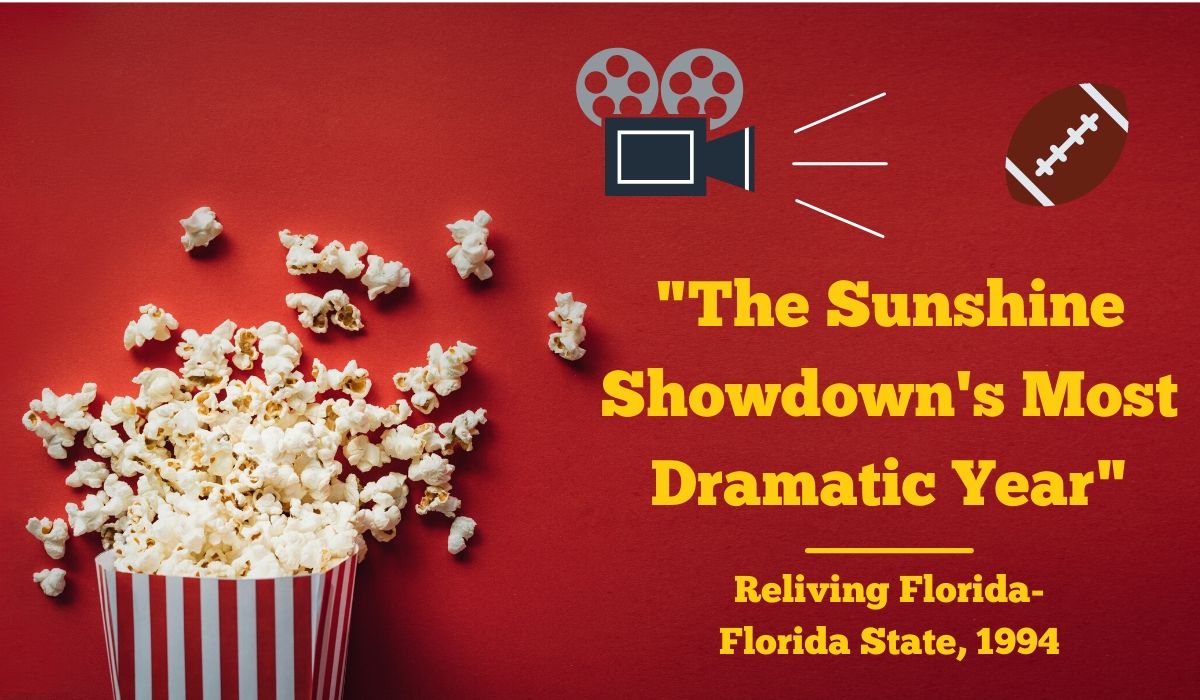 Florida vs. Florida State, 1994: Reliving the most dramatic year in the Sunshine Showdown